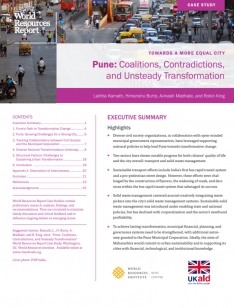 This case study in the World Resources Report, “Towards a More Equal City,” examines the processes of transformative change and the conditions both enabling and inhibiting it in Pune, the second largest city in Maharashtra state, India. Many initiatives across diverse sectors have had a positive, qualitative impact on sustainability and service provision in Pune, particularly in its solid waste and transport sectors between the 1990s and the present. These initiatives reflect important shifts in the local government’s attitudes and systems towards greater sustainability and equity and have had a positive impact on many lives.

Pune’s transformation towards sustainable transportation began in the early 2000s. It has included efforts to reduce dependence on private vehicles by improving public transport through the implementation of India’s first bus rapid transit system and creating more inclusive street space by emphasizing non-motorized transport generally. Improvements in Pune’s solid waste management systems have explicitly linked environmental, labor-related and economic aspects of life in the city by including waste pickers in the formal waste management system of the city. This innovation has also led to new national-level policies. Civil society organizations played a key role in both sectors, aligning with the municipality to catalyze positive reforms for labor, the economy, and the environment.

Case studies in the World Resources Report, “Towards a More Equal City,” examine transformative urban change defined as that which affects multiple sectors and institutional practices, continues across more than one political administration, and is sustained for more than 10 years, resulting in more equitable access to core services. The goal of “Towards a More Equal City” is to inform urban change agents – government officials, policymakers, civil society organizations, citizens, and the private sector – about how transformative change happens, the various forms it takes, and how they can support transformation towards more equal cities.

Pune is an economically and politically dynamic city, well-woven into networks of goods, services, and ideas. However, it faces the increasing service and infrastructure demands associated with rapid growth. This case study looks at how civil society organizations (CSOs) and the local institutions interacted with state- and national-level policies and funding to forge innovative solutions to challenges in the transport and solid waste management sectors. The paper examines transformative change in the transport and solid waste management sectors in Pune, India, between the 1990s and the present. Based on our theory of transformative change, it identifies triggers of change; explores the roles of enabling and inhibiting factors such as governance, finance, and planning; and examines the extent to which transformative change has been institutionalized. We analyze existing research, government data, and key informant interviews with representatives from government, civil society, and academia to consider whether and how transformative change has taken place.

Given the limited powers that Indian cities have, policy options must be framed within broader national and state contexts, which can be split into three phases of the 1992-2018 time frame that this study covers. The first phase, from 1992 to 2004, saw greater power allocated to Indian cities by the 74th Constitutional Amendment Act (CAA), along with a broader movement towards decentralization and economic liberalization. This provided greater capacity and authority for the local government, through the Pune Municipal Corporation (PMC), as well as broader space for CSOs’ participation that allowed them to gain credibility and authority. The second phase, from 2005 to 2013, was dominated by the Jawaharlal Nehru National Urban Renewal Mission (JNNURM) that provided funds for infrastructure and basic services to the poor in exchange for urban governance reforms that promoted expanded roles for both CSOs and private firms, strengthening a technocratic approach that marginalized elected politicians. In this phase, CSOs took advantage of their greater role; many different coalitions were formed and partnerships with the PMC were consolidated. The third phase began in 2014 with the launch of the Smart Cities Mission. It further disempowered elected politicians through the establishment of special purpose vehicles1 for project execution, while strengthening the role of private consulting firms and splintering local government authority. This third phase has also revealed the inability of CSO coalitions to accelerate change processes.

Pune’s transformation towards sustainable transport began in the early 2000s. This has included efforts to reduce dependence on private vehicles by improving public transport, with the implementation of India’s first bus rapid transit system (BRTS, sometimes also referred to as BRT), and creating more inclusive street space by emphasizing nonmotorized transport. Working within the framework of the National Urban Transport Policy and funding programs such as the JNNURM, CSOs helped nudge progressive city officials in this direction. However, this shift towards sustainable transport happened in an uncoordinated and incremental manner, with decisions supporting competing agendas. As a result, progress has not been linear.

Improvements in Pune’s solid waste management systems have explicitly linked environmental, labor-related, and economic aspects of life in the city, driving the creation of new national-level policies and taking advantage of existing ones. Waste pickers organized to form a union in 1993 and were incorporated into formal municipal solid waste management (MSWM) service provision systems with the support of the CSO coalition Waste Matters, winning identity cards and benefits. National-level MSWM rules emerged in 2000 that acknowledged the role of waste pickers and incorporated their view that waste could be a resource with which to promote waste segregation, processing, and recycling. Spurred on by a state government deadline to achieve door-to-door waste collection, in 2008 the PMC launched a partnership with Solid Waste Collection and Handling (SWaCH), India’s first fully self-owned waste-pickers cooperative. After initial success, the waste industry’s increasing corporatization and profitability has reduced the PMC’s support of the effort, and the city now seems to be shifting gears, moving towards more technology-based and centralized waste collection.

This case study is part of the larger World Resources Report, “Towards a More Equal City,” which considers sustainability to be composed of three interrelated issues: equity, the economy and the environment. The series uses equitable access to urban services as an entry point for examining whether meeting the needs of the under-served can improve economic productivity and environmental sustainability for the entire city.

The goal of “Towards a More Equal City” is to inform urban change agents – government officials, policymakers, civil society organizations and citizens, and the private sector – about how transformative change happens, the various forms it takes, and how they can support transformation towards more equal cities.