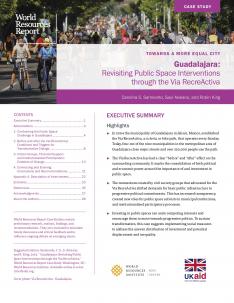 This case study in the World Resources Report, “Towards a More Equal City,” tells the story of the Via RecreActiva – a ciclovía, or bike path, in the city of Guadalajara, Mexico. More than 60 kilometers of streets are closed every Sunday for this event, drawing more than 220,000 people. The Via RecreActiva exemplifies how a public space intervention can alter the social and political fabric of a city, sparking broader transformative change to public space use and inclusive governance.

Since 2004, Guadalajara has closed streets across the city between 8am and 2pm on Sundays for a period when bicyclists, pedestrians, shoppers and dancers reclaim public space normally dominated by cars for public recreation. The Via RecreActiva crisscrosses the city, connecting the traditionally poorer eastern neighborhoods with the more advantaged western areas. Citizens are encouraged to express themselves through presentations, concerts, plays and dances. More than 52 free events are held annually.

The Via RecreActiva has inspired a new collective image of what public space could look like and has sparked a rise in civil society and political activism for the equitable and safe use of space around the city. Though the ciclovía has not reversed systematic inequality, it marks an important move towards prioritizing people over cars in Guadalajara, a trend that cities around the world are embracing.

Case studies in the World Resources Report, “Towards a More Equal City,” examine transformative urban change defined as that which affects multiple sectors and institutional practices, continues across more than one political administration, and is sustained for more than 10 years, resulting in more equitable access to core services. The goal of “Towards a More Equal City” is to inform urban change agents – government officials, policymakers, civil society organizations, citizens and the private sector – about how transformative change happens, the various forms it takes and how they can support transformation towards more equal cities.

Guadalajara is the second-largest city in Mexico with over 4.8 million inhabitants in its metropolitan area. Guadalajara’s urban growth has been rapid and discontinuous, which makes it increasingly difficult to provide quality services and infrastructure. Between 1990 and 2015, 97 percent of the Guadalajara Metropolitan Area (Área Metropolitana de Guadalajara) growth occurred outside the boundaries of the municipality of Guadalajara itself, either at its periphery or as discontinuous urban areas. In terms of economic and political investment, the city has historically been divided between the more affluent west and the poorer communities in the east. The role of public space in addressing issues of inequality in Guadalajara is not clear. Public spaces such as plazas, parks, green spaces, streets, and sidewalks help facilitate civic participation and encourage people to interact with each other and nature, both of which are fundamental rights of citizenship. However, investing in public space does not always show a direct impact on inequality or even on increased accessibility.

This case looks at the establishment of the Via RecreActiva (VR) in 2004, currently held every Sunday from 8 AM to 2 PM. Ciclovías close roads to motorized vehicles for several hours to allow citizens from all classes of society to enjoy the space by riding bicycles, walking, or exercising. Four out of nine municipalities participate in the VR, which connects spatially segregated areas in Guadalajara, but it remains largely limited to the center of the metropolitan area.

There is a clear “before” and “after” the VR. It marks the consolidation of both political and economic power around the importance of and investment in public space. The development of the VR was led by influential members of the business community. Enrique Peñalosa, the former mayor of Bogotá, Colombia, influenced a group of businesspeople initially seeking to fund programs that would change their city’s image. This led to increased political and economic investment in public space, including projects like the VR.

Three years later, organizations came together to fight for increased accessibility and investment in nonmotorized mobility and public space while protesting planning efforts that prioritized motorized transportation. In 2010, this coalition, which included some of the same actors who set the VR in motion, successfully halted an elevated expressway called the Via Express, which prioritized motorized mobility. The coalition moved to demand increased public participation and transparency in planning processes and governance decisions.

Some of those active in the fight against the Via Express now hold important governance positions. Some form part of the Citizens’ Movement (Movimiento Ciudadano), the new political party that displaced the traditional National Action Party (Partido Acción Nacional) and the Institutional Revolutionary Party (Partido Revolucionario Institucional) and won the municipal seat in 2015. Municipal programs, such as Free Sidewalks (Banquetas Libres), and new regional entities like the Planning Institute for the Metropolitan Area of Guadalajara (Instituto Metropolitano de Planeación del Área Metropolitana de Guadalajara), which encourages intermunicipal and metropolitan cooperation, have institutionalized some of these changes at different scales. In May 2016 the state adopted the new Electoral Code for Participation, establishing additional governance tools, including participatory budgeting and popular consultations. Despite these victories, further transformation is challenged by the imbalance between private investment in development and investment that meets public needs.

This case shows how civil society activism and multiple sector stakeholder engagement around public space helped created space for social engagement not only to produce an awareness of the use of street as a more democratic public space in Guadalajara, but also led to certain improvements and policy changes. In addition to increasing funds and political support for public space and nonmotorized transportation, the effort led to the inclusion of activists who helped push for these changes in the city’s new administration. Now, however, as the new administration begins to take on new projects—including a light rail transit line—it faces the challenge of planning collaboratively with civil society organizations, and especially with residents who are concerned about gentrification and displacement. Challenges involving accountability and trust between civil society and government continue to linger, limiting the reach of this transformational change.

This case study is part of the larger World Resources Report (WRR),"Towards a More Equal City". The WRR uses equitable access to core urban services as an entry point for examining whether meeting the needs of the under-served can improve the other two dimensions of sustainability. The city case studies examine transformative urban change, defined as that which affects multiple sectors and institutional practices, continues across more than one political administration, and is sustained for more than 10 years, resulting in more equitable access to core services and a more equal city overall. The goal of the WRR case studies is to inform urban change agents—including policymakers at all levels of government, civil society organizations, the private sector, and citizens—about how transformative change happens, the various forms it takes, and how they can support transformation towards more equal cities.

Public Space for Recreation Is Good for Cities. Guadalajara, Mexico Shows Us 3 Reasons Why.