Surabaya: The Legacy of Participatory Upgrading of Informal Settlements 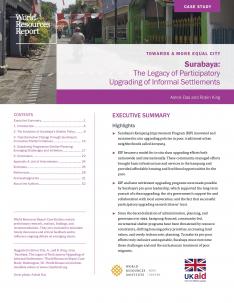 This case study in the World Resources Report (WRR), Towards a More Equal City, describes the history of Surabaya, Indonesia’s inclusive housing policy and how the Kampung Improvement Program (KIP) became a model for in situ slum upgrading efforts both nationwide and internationally. KIPs put residents at the heart of upgrading work and brought basic infrastructure and services to traditional urban neighborhoods called kampung. These community-managed efforts provided affordable housing and livelihood opportunities for the poor.

Part of the program’s success was due pro-poor leadership at the city level and collaboration between the local government and the university, Sepuluh Nopember Institute of Technology. Residents have benefitted from improved access to basic services, structurally sound houses and shops, a healthy local environment, and a sense of pride and ownership over their neighborhoods.

New challenges threaten Surabaya’s legacy of progressive slum upgrading practices, however, including rising demand for urban land and infrastructure and a shift away from KIPs to public rental houses, known as rusunawa. Improving the city’s transportation network, limiting high-end development that displaces low-income communities, and ending the exclusionary treatment of migrants are a few of the ways that Surabaya can make its housing policies truly inclusive and equitable.

WRR case studies examine transformative urban change defined as that which affects multiple sectors and institutional practices, continues across more than one political administration, and is sustained for more than 10 years, resulting in more equitable access to core services. The goal of Towards a More Equal City is to inform urban change agents ‒ government officials, policymakers, civil society organizations, citizens and the private sector ‒ about how transformative change happens, the various forms it takes and how they can support transformation towards more equal cities.

From Mobility to Access for All: Expanding Urban Transportation Choices in the Global South