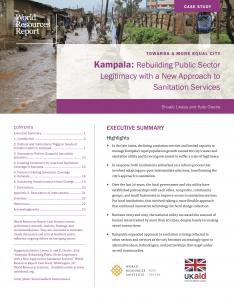 This case study in the World Resources Report, “Towards a More Equal City,” examines transformative urban change in Kampala, Uganda, by following its sanitation reforms. The research follows the political process that created favorable conditions for the implementation of innovative solutions to sanitation service provision. This paper also reviews the evidence on whether the sanitation reform triggered a transformative change with equitable outcomes in the city of Kampala overall.

For decades, Kampala has raced to keep up with its own rapid growth. Set alongside Lake Victoria, the Ugandan capital more than quadrupled in physical footprint between 1991 and 2012 as population doubled to 1.5 million people.

One of Kampala’s biggest challenges is providing the basic services urban residents need as the city expands, like water, electricity and roads. Infrastructure projects launched in the 1990s were an improvement but still left many of the city’s poorest residents underserved, alienated and ready to take things into their own hands. Sewage and sanitation, in particular, were in poor shape.

Only 10 percent of Kampala is hooked up to sewerage lines, leaving the majority of residents to rely on pit latrines they dig themselves. The municipal sanitation utility is only responsible for the sewer connections and does not provide any emptying or construction services for pit latrines. Without collection and treatment services, households often open their latrines during the rainy seasons to flush out untreated waste. The result is a polluted and deadly urban ecosystem. Three cholera outbreaks from 1997 to 2015 were directly linked to poor sanitary conditions.

By supporting innovative technologies and moving towards a “pro-poor” solution, Kampala is now improving sanitation for more residents. Reforms have contributed to a 32-fold increase in the amount of human waste treated in the city. With the help of "the Gulper" and other alternative innovations such as the EcoSan toilet and prepaid watering systems hooked up to communal toilets, Kampala now treats 81,000 cubic meters about (21 million gallons) of human waste annually—a little more than the capacity of 32 Olympic swimming pools. And these gains were achieved despite only a negligible increase in homes connected to the sewer.

Case studies in the World Resources Report, “Towards a More Equal City,” examine transformative urban change defined as that which affects multiple sectors and institutional practices, continues across more than one political administration, and is sustained for more than 10 years, resulting in more equitable access to core services. The goal of “Towards a More Equal City” is to inform urban change agents – government officials, policymakers, civil society organizations, citizens, and the private sector – about how transformative change happens, the various forms it takes, and how they can support transformation towards more equal cities.

By 1998, Kampala, Uganda’s largest city, was faced with an overwhelming backlog in service provision. Public trust plummeted, challenging the legitimacy of both the city administration, the Kampala City Corporation Administration (KCCA), and the utility, the National Water and Sewerage Corporation (NWSC). As the city grew, there was less and less space for new latrines, and financial resources were relatively limited. Furthermore, over 60 percent of the urban population is poor, so sewerage connections could not be provided on a fee for-service basis.

This case study examines Kampala’s messy but consistent progress towards providing expanded sanitation services. This progress stems from the fact that both the city administration and the national utility have redefined their approach to service provision, moving away from expanded sewer connections and towards other kinds of improved sanitation options. The result is an experimental, innovative, and pro-poor approach to providing intermediate solutions that better serve different neighborhoods and household incomes. The case study relies on evidence from existing research, government-produced data, and semi structured interviews with a variety of key informants. We identify critical triggers of change, explore the roles of key enabling and inhibiting factors, and discuss progress towards institutionalization.

The introduction of multiparty politics and decentralization put pressure on the KCCA and the NWSC to find innovative solutions to sanitation service provision. The KCCA began working with the NWSC to redefine service provision. The NWSC recognized that informal areas had many potential customers that were not being served, but were difficult to serve with traditional sewer connections. Over time they instituted mechanisms that encouraged alternative technologies, such as the Gulper, a latrine-emptying service. These technologies were made possible by establishing a pro-poor unit at the utility, enacting performance-based incentives for city and utility

staff, redefining sanitation standards, and implementing new stakeholder coordination mechanisms. Donors’ financial support had a complicated impact: on the one hand, it allowed new ideas to be put forward, but on the other, such support proved to be inconsistent, conditional, and focused on short term planning outcomes.

Several conditions have enabled new approaches to service provision in Kampala. One of the most important was the emergence of a results-driven culture within the KCCA and the NWSC, which created continuous internal pressure to expand services and adopt new technology. This cultural shift was made possible by leadership in both organizations that encouraged outside-the-box thinking. Support from strong leaders promoted incentives to change the city’s approach to planning. Finally, community participation mechanisms helped tailor sanitation solutions to the community, ratcheting up support for intermediate solutions. This made communities willing to accept new solutions and reduced the influence of politics over the process.

As is so often the case, the unfolding change and associated long-term outcomes remain vulnerable to several inhibiting factors. The first is a mentality of projectization, whereby utility and city staff implement new approaches that only fit within the context of one specific project. This mentality inhibits long-term thinking and policy learning because funding and ownership are highly fragmented. In the past this has slowed the transformation process, and this issue will likely continue as funding dries up for various projects. Second, this issue is compounded by a small and fragmented private sector that does not offer long-term investment or operations support, making funding volatile. Finally, information sharing is limited between stakeholders, which leads to duplicated and costly efforts and further exacerbates the ongoing issues with projectization and limited private sector involvement.

Kampala’s approach to sanitation has increased households’ coverage, affordability, and access to decent sanitation options. We find that expanding sanitation coverage to poor areas has the potential to improve the whole city’s health and well-being. There are now partnerships, innovative collaborations, technologies, and experiments that transcend the usual urban management approaches. The beginning of a multisector transformation seems to be under way; projects ranging from planting trees to widening roads are being undertaken in consultation with communities. Furthermore, the environmental benefits of Kampala’s pro-poor approach are just beginning to emerge. Kampala’s transformation offers hope to other cities facing service backlogs, particularly regarding sanitation.

This case study is part of the larger World Resources Report, “Towards a More Equal City,” which considers sustainability to be composed of three interrelated issues: equity, the economy and the environment. The series uses equitable access to urban services as an entry point for examining whether meeting the needs of the under-served can improve economic productivity and environmental sustainability for the entire city.

The goal of “Towards a More Equal City” is to inform urban change agents – government officials, policymakers, civil society organizations and citizens, and the private sector – about how transformative change happens, the various forms it takes, and how they can support transformation towards more equal cities.

Putting the Poor First to Improve Sanitation in Kampala