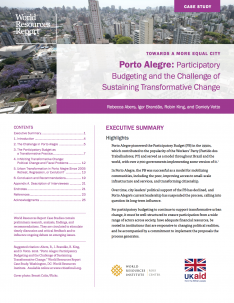 This case study in the World Resources Report, "Towards a More Equal City," examines transformative urban change in Porto Alegre, Brazil, through the lens of participatory budgeting. The research focuses on whether and how transformative change has taken place in the city between 1990 and the present.

The paper analyzes the reasons for the suspension and argues that the success of participatory budgeting as a tool of transformative urban change in contingent on four conditions: 1) well-structured participatory arrangements to ensure participation from a wide range of actors across society; 2) adequate financial resources; 3) political commitment and flexibility to adjust to changing political realities; and 3) government commitment to implement the proposals the process generates.

Case studies in the World Resources Report, "Towards a More Equal City," examine transformative urban change defined as that which affects multiple sectors and institutional practices, continues across more than one political administration, and is sustained for more than 10 years, resulting in more equitable access to core services. The goal of “Towards a More Equal City” is to inform urban change agents – government officials, policymakers, civil society organizations, citizens, and the private sector – about how transformative change happens, the various forms it takes, and how they can support transformation towards more equal cities.

Like other cities in Brazil, Porto Alegre expanded rapidly between 1950 and 1990. The city was unable to keep up with the demand for public services amid the inflows of migrants. As a result, vilas (the term used in southern Brazil for poor settlements with irregular land tenure) expanded in peripheral areas, in contrast to the wealthier urban core. Clientelist political relations perpetuated urban inequality.

In the 1990s, under mayors from the new Workers’ Party (Partido dos Trabalhadores), the city developed the participatory budget to address political, economic, and social exclusion. The city’s leaders defined their participatory approach in line with their democratic socialist ideals, creating opportunities to combine finance, governance, and planning processes to improve access to urban services for under-served and poor communities.

Especially in its first decade, the participatory budget triggered transformative change in Porto Alegre by addressing social, economic, and political exclusion and promoting creative, bottom-up inputs into financial allocation decisions. Organized to ensure representation by geography, and later by theme, citizen inputs were used to decide priorities for public investments in their neighbor hoods to improve their lives. Six key outcomes have been identified in the participatory budget experience in Porto Alegre:

This study finds that while the early stages of implementing the participatory budget did promote the first five outcomes, two interacting problems undermined the transformative change process: political commitment to the policy declined over time; and although effective for involving citizens in small-scale, community-based decision-making, the policy lacked an effective mechanism for incorporating citizens – especially the under-served – in long-term city planning. These limitations shed light on the fact that even the most successful efforts to promote inclusion can lose transformative power over time if political support for maintaining and deepening that inclusive process falters.

This case highlights the importance of political commitment, adequate financial resources, and well-structured participatory arrangements in tackling issues of exclusion and moving towards a more equal city. Transformative change requires sustained efforts on the political, economic, and social fronts in order to avoid permanent reversals and to truly move towards a more equal city.

This case study is part of the larger World Resources Report, Towards a More Equal City, which considers sustainability to be composed of three interrelated issues: equity, the economy and the environment. The series uses equitable access to urban services as an entry point for examining whether meeting the needs of the under-served can improve economic productivity and environmental sustainability for the entire city.

The goal of Towards a More Equal City is to inform urban change agents – government officials, policymakers, civil society organizations and citizens, and the private sector – about how transformative change happens, the various forms it takes, and how they can support transformation towards more equal cities.

What if Citizens Set City Budgets? An Experiment That Captivated the World—Participatory Budgeting—Might Be Abandoned in its Birthplace