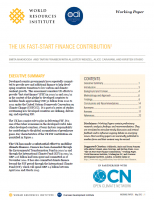 The UK has made a substantial effort to mobilise climate finance. Finance has been channelled through the Environmental Transformation Fund in 2010/11 and through the International Climate Fund (ICF) in 2011/12. GBP 1.06 billion had been spent and committed as of November 2011. It has also committed climate finance beyond the FSF period through the International Climate Fund (ICF), which will spend GBP 2.9 billion between April 2011 and March 2015.

The UK has made a substantial effort to mobilise climate finance. Finance has been channelled through the Environmental Transformation Fund in 2010/11 and through the International Climate Fund (ICF) in 2011/12. GBP 1.06 billion had been spent and committed as of November 2011. It has also committed climate finance beyond the FSF period through the International Climate Fund (ICF), which will spend GBP 2.9 billion between April 2011 and March 2015.

The majority of UK finance is spent by multilateral institutions, in the form of capital contributions. UK contributions of GBP 715 million to the Climate Investment Funds (CIFs) administered by the World Bank in partnership with Regional Development Banks constitute the largest share of its FSF.

The UK does not count private finance toward its FSF contribution, but it does count non-grant instruments as well as development assistance. The majority of the projects supported do seem to have climate change as a principal objective.

While the FSF contribution reflects some new effort to address climate change, it is unclear that the contribution as a whole can be considered “new and additional. Since the start of the FSF period, the UK has substantially increased international finance that explicitly targets climate change. The UK is also counting as FSF projects and programmes that it was funding – and that were likely delivering climate benefits – prior to the FSF period. Much of the funding counted was pledged prior to the FSF period, notably the contributions to the CIFs and Congo Basin Forest Fund. Climate finance appears to be increasing at a significantly faster rate than development assistance.

The UK is relatively transparent about its FSF spend, but more can be done. The UK discloses a list of projects and programmes to which FSF has been directed to interested stakeholders, and to the European Commission (EC) on an annual basis. The UK’s adoption of new transparency standards for its administrative processes is substantially strengthening its performance in this regard. Specifically, it participates in the International Aid Transparency Initiative (IATI) for its official development assistance (ODA) spending. In this context, government departments are now required to disclose the business case for all projects that receive public support. A business case presents the key components and purpose of the programme, and how it contributes to the achievement of relevant government UK strategic objectives. This includes relatively comprehensive information on the institutions receiving funding and implementing projects.

There is a need to improve access to information in practice. The commitment to disclose business cases was made in January 2011 and has not been applied retroactively. In practice, few business cases have yet been made available. We do note some discrepancies between aggregate and project-level reporting, although we recognise that the project list is a snapshot at a given moment in time of the collection of FSF recipients. As new systems to improve reporting and disclosure on the status of programmes funded by the UK government are implemented, we should expect to see higher levels of transparency realised in practice.

Developed country governments have repeatedly committed to provide new and additional finance to help developing countries transition to low-carbon and climate-resilient growth. This assessment considers UK efforts to provide “fast start finance” (FSF) in 2010/11 and 2011/12 in the context of the pledge by developed countries to mobilise funds approaching USD 30 billion from 2010 to 2012 under the United Nations Framework Convention on Climate Change (UNFCCC). It is part of a series of studies scrutinising how developed countries are defining, delivering, and reporting FSF.

The UK has a major role to play in delivering FSF. It is one of the richer economies in the developed world. Like other developed countries, it bears historic responsibility for contributing to the global accumulation of greenhouse gases. Key characteristics of the UK FSF contribution are quantified in Figure 1.

Recommendations for the UK