The U.S. Contribution to Fast-Start Finance 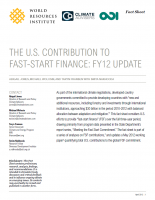 This fact sheet updates a May 2012 working paper on the U.S. fast-start finance (FSF) contribution over the 2010-2012 period. It analyzes the financial instruments involved in the U.S. self-reported portfolio—about $7.5 billion, or 20 percent of the total FSF commitment globally. It also identifies the extent to which climate change objectives target adaptation and mitigation through recipient institutions in developing countries. It is intended to provide a range of key players in climate finance—including policymakers, development finance institutions, companies, and non-governmental organizations—with an assessment of past efforts to define, deliver, and report U.S. FSF in order to inform delivery of future climate finance.

As part of the international climate negotiations, developed country governments committed to provide developing countries with “new and additional resources, including forestry and investments through international institutions, approaching $30 billion in the period 2010-2012 with balanced allocation between adaptation and mitigation.” This fact sheet considers U.S. efforts to provide “fast-start finance” (FSF) over the full three-year period, drawing primarily from program data presented in the State Department’s report series, “Meeting the Fast Start Commitment.” The fact sheet is part of a series of analyses on FSF contributions, and updates a May 2012 working paper quantifying total U.S. contributions to the global FSF commitment.

Over the FSF period, the United States has reported roughly $7.5 billion, or about 20% of the global self-reported total flows of FSF. Notable attributes of the U.S. FSF contribution include:

Transparency has improved in FY12 reporting, but there is room for further improvement. In addition to implementing the new international reporting requirements adopted at Doha, the following actions would help support verification of aggregate figures, as well as coordination and accountability:

How Much Did the United States Contribute to International Fast-Start Finance?

How Do New 2050 Climate Strategies from Canada, Mexico and the US Stack Up?