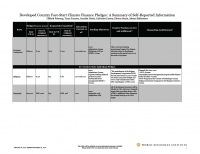 Reiterating a pledge made in Copenhagen in 2009, the Cancun Agreements of December 2010 formally commit developed countries to collectively provide resources “approaching USD 30 billion for the period 2010 - 2012” to support developing countries’ climate efforts. This so-called “fast-start” finance will help developing countries, particularly the poorest and most vulnerable, mitigate (reduce) their greenhouse gas emissions, and adapt and cope with the effects of climate change. These pledges also present an opportunity to build trust between developed and developing countries in the international climate arena, in turn fostering progress towards a comprehensive post-2012 international climate agreement.

WRI has synthesized available information on countries’ pledges and measures they have taken to make the pledged resources available to developing countries. The accompanying table sets out both the amounts and the mechanisms by which funding would be delivered. WRI has also looked at how countries indicate whether their pledges will provide “new and additional” funds compared to what they provide as official development assistance. In-depth analysis on a subset of countries’ fast-start finance contributions is available separately.

This table will be continuously updated as more information becomes available.

Q&A on this Analysis

Based on our research, as of November 26, 2012, 23 developed countries and the European Commission have publicly announced their individual fast-start finance pledges, in addition to the European Union’s collective pledge. These pledges total USD 33.92 billion. While this represents a significant step in the right direction, the extent to which these pledges are consistent with internationally agreed principles for fast-start finance is unclear. The Cancun Agreements mandate that fast-start funds have a “balanced allocation between adaptation and mitigation,” be “new and additional,” be “prioritized for the most vulnerable developing countries, such as the least developed countries, small island developing States and Africa,” and include “forestry and investments through international institutions.” Because the details of this mandate have not been defined, it is not clear that developed countries’ fast-start finance contributions fulfill these criteria.

Finally, ensuring that pledges are actually delivered will be essential. According to reported information of the pledged funds, USD 28.06 billion has been requested and/or budgeted by the executive bodies of the countries during the fast-start period. In some cases, the legislative bodies have also approved these requests. The actual delivery and implementation of the finance, however, can be complicated to track, and is generally not documented in countries’ fast-start finance reports.

Do the funds have a “balanced allocation between adaptation and mitigation”?

Countries often specify the general objective that their fast-start funds will support. For example, of the USD 1.58 billion mobilized for fast-start by Germany in 2010 and 2011, 48 percent will support mitigation, 28 percent will support adaptation, 21 percent will support REDD+, and 3 percent will support multipurpose activities. In its 2010 fast-start finance report, Germany highlighted the challenges of identifying suitable adaptation projects as the reason for this, and recognized the need to adjust the allocation of funds across the three areas of mitigation, adaptation and REDD+. In the case of both Japan and the United States, a large majority of fast-start finance supports mitigation objectives. The grant-based portion of their contributions, however, gives more balanced consideration to adaptation. Several countries involved in the Interim REDD+ Partnership — a process created parallel to the UNFCCC to ensure effective and sustainable REDD+ (reduced emissions from deforestation and forest degradation) actions over the next few years — have also specified that at least 20 percent of their funds will support REDD+. However, there is no agreed-upon definition among countries of what constitutes a “balanced allocation.”

Are the pledged funds “new and additional”?

“New” funding represents an increase relative to pledges or allocations from previous years. A number of pledges include restated or renamed commitments already made in the past. For example, Japan’s Hatoyama Initiative is a restructuring of the previously announced Japanese Cool Earth Partnership, with some new resources included in the Initiative. Countries such as the United Kingdom and the United States are counting previous commitments to the Climate Investment Funds (CIFs) as part of their fast-start finance pledge. The United States also counts its annual contribution to the Montreal Protocol Fund, a long-standing commitment that dates back more than two decades.

Funds that are “additional” ensure that their delivery does not result in the diversion of funds from other important development objectives. In other words, climate mitigation and adaptation funds should be additional to development aid. Parties to the UNFCCC have not yet achieved consensus on a clear and specific definition of ‘additionality’ that can be applied uniformly to developed country financial pledges. As a result, countries have proposed a variety of methods for defining the additionality of their fast-start finance.

Do the pledges include “investments through international institutions”?

Countries are channeling investments through a mix of multilateral, bilateral, and public-private institutions. Several countries, including Japan and the United States, are channeling a considerable amount of their funds through export credit agencies and other public-private channels. The Climate Investment Funds(CIFs) and the Global Environment Facility (GEF) are the primary multilateral institutions of choice through which other funds will be channeled. The governance of the funds has implications for the effectiveness and perceived legitimacy of the overall climate finance architecture. Developing countries generally prefer that institutions governing finance ensure developing country ownership of funded activities and prioritize funding for climate vulnerable countries. Developed countries tend to emphasize the need to minimize bureaucratic costs and ensure the effective use of resources.

Why is fast-start finance “prioritized for the most vulnerable developing countries, such as the least developed countries, small island developing States, and Africa”?

Countries under the Convention recognize that developing countries are highly vulnerable to climate change impacts because they have fewer resources to adapt to the effects of climate change, which can include increased droughts and floods, rising sea levels, and greater uncertainty in the agricultural sector. Least developed countries (LDCs) and small island developing States (SIDS) in particular are recognized as needing special consideration due to their extreme vulnerability. For these reasons, developed countries have pledged to prioritize fast start funds for the “most vulnerable countries.” Several countries are channeling their fast start finance through the Least Developed Countries Fund or the Adaptation Fund, many are channeling finance directly to SIDS and LDCs, and Australia in particular states that it will channel about one third of its fast-start finance to SIDS and about one quarter to LDCs.

What types of financial instruments are countries using?

There are several different types of financial instruments countries are using to deliver their fast-start finance, including grants, loans, equity, loan guarantees, insurance, and private investments. Many countries have provided some information on the type of financial instruments used. For example, the US reported providing USD 4.7 billion in grants through Congressional appropriations, USD 2.7 billion in development finance and export credits, which mostly take the form of concessional loans. Norway reports that all of its fast-start finance will be grants. Meanwhile, Japan’s fast-start finance includes grants and loans that meet ODA standards, finance in the form of ‘other official flows’, and may also count leveraged private finance, though this is ambiguous. However, reporting on the type of financial instrument used is neither comprehensive nor consistent. For example, little information is reported on the concessionality of the loans when used.

What are the next steps to ensure clarity on the delivery of climate finance pledges in the future?

The UNFCCC system for developed countries to report on the delivery of climate finance faces several challenges, which limit the utility of available data. For example, countries currently use multiple methods for reporting and often provided insufficient information even where requested. To address this, the Cancun Agreements mandate more frequent reporting by developed countries using an enhanced common reporting format.

To build trust with developing country counterparts, developed countries should improve their fast-start finance reporting in the future, for example, by including more comprehensive, comparable and transparent information on the following seven elements in their annual fast-start finance reports: scale, method for determining that the money is “new and additional,” channeling institutions, objective, geographic distribution, status of the pledge, and type of financial instrument.