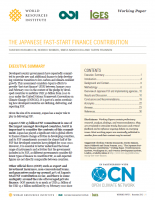 Japan’s fast-start finance (FSF) commitment is one of the largest amongst developed countries, but it is important to consider the contents of this commitment. Japan has played a significant role in global efforts to finance climate change activities in developing countries, and its FSF commitments account for almost half of the FSF that developed countries have pledged for 2010-2012. However, it is essential to better understand the broad range of instruments and activities that the government includes in its FSF, as different governments consider different types of finance to constitute FSF, so self-reported figures are not directly comparable between countries.

The Japanese government has already taken steps to strengthen the transparency of Japanese FSF, such as adding information about channeling institutions to the list of FSF projects included in its second submission to the UNFCCC. However, additional information would facilitate an informed discussion of the adequacy of FSF efforts. The following practices would further strengthen the transparency of Japanese climate finance reporting:

Developed country governments have repeatedly committed to provide new and additional finance to help developing countries transition to low-carbon and climate-resilient growth. This assessment considers Japan’s efforts to provide “fast start finance” (FSF) between January 2010 and February 2012 in the context of the pledge by developed countries to mobilize USD 30 billion from 2010 to 2012 under the United Nations Framework Convention on Climate Change (UNFCCC). It is part of a series scrutinizing how developed countries are defining, delivering, and reporting FSF.

Given the size of its economy, Japan has a major role to play in delivering FSF.

Japan’s USD 15 billion FSF commitment is one of the largest amongst developed countries, but it is important to consider the contents of this commitment. Japan has played a significant role in global efforts to finance climate change activities in developing countries, and its FSF commitments accounts for almost half of the FSF that developed countries have pledged for 2010-2012. However, it is essential to better understand the broad range of instruments and activities that the government includes in its FSF, as different governments consider different types of finance to constitute FSF, so self-reported figures are not directly comparable between countries.

Japanese FSF is heavily weighted toward mitigation. About 70 percent of Japanese FSF addresses mitigation objectives. Most mitigation finance, in turn, is financed through loans (both ODA and non-ODA), which constitute about 75 percent of the contribution for infrastructure development projects, such as urban transport projects. There is a more even balance between adaptation and mitigation objectives within the grant portion of the FSF contribution (adaptation: 30 percent, mitigation and REDD+: 27 percent, multiple objectives: 43 percent). A significant share of Japanese FSF addresses one or more non-climate objectives in addition to mitigation or adaptation urban transport projects. Asia receives the most FSF among all regions, irrespective of financial instrument type. It is worth noting that the Japanese FSF includes a number of “clean” fossil fuel power plant construction projects, such as a natural gas combined cycle (NGCC) power plant project in Central Asia. There is a need for greater clarity amongst members of the international community about how support for lower carbon fossil fuel facilities should be treated in the context of climate finance.

On balance, it is not clear that the entirety of the Japanese FSF is “new and additional." While the FSF contribution reflects some new effort to address climate change, it is unclear that the contribution as a whole can be considered “new and additional.” Since the start of the FSF period, Japan has substantially increased international finance that explicitly targets climate change. Some Japanese agencies have also begun integrating climate change into aspects of development assistance and development finance. Applying five different criteria proposed by experts and practitioners, however, the results indicate that at least a portion of the Japanese FSF spend is not new and additional. A significant share of Japanese FSF reflects pre-existing pledges to development assistance initiatives to scale up climate change related finance such as those articulated in the Japan Cool Earth Partnership of 2008. Furthermore, Japan’s FSF cannot be seen as additional to its existing commitments to scale up development finance to 0.7 percent of its GNI.

FSF reporting follows Japan’s standard processes for reporting on conventional development assistance, whose transparency can be strengthened to meet new needs associated with FSF. There is room for improvement in terms of the transparency, accountability and credibility of Japanese FSF. Some of the identified issues may be attributable to the fact that Japanese FSF contains a large number of projects supported by a variety of channeling institutions. This has made it difficult for the government to present a clear overview of Japanese FSF.

The largest issue is that the information on FSF is disaggregated, although project-level information provided by the implementing agencies is detailed. Most of the climate finance projects could not be easily identified without extensive key word research on the websites of implementing agencies. This study identified about 250 likely FSF projects, amounting to USD 11.7 billion or nearly 90 percent of the amount committed by 29 February 2012. At the same time, about 500 FSF projects – most of which are of relatively low monetary value – could not be independently identified.