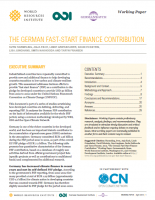 Germany’s fast-start finance (FSF) contribution reflects a significant focus on financing climate action in developing countries. Germany exceeded its self-defined FSF pledge for the 2010-2012 FSF period, providing a total of EUR 1.29 billion, and also pledged to deliver EUR 1.8 billion in 2013. It is also one of the few countries to have published and adhered to a specific definition of what constitutes "new and additional" climate finance.

This working paper provides policymakers and other climate finance practitioners with an assessment of German FSF project data. It examines characteristics of the finance such as channeling institutions employed and the extent of support for mitigation and adaptation activities. It also discusses innovative institutions for climate finance, Germany’s definition of additionality for FSF, and the degree to which the finance might be considered new and additional.

Industrialized countries have repeatedly committed to provide new and additional finance to help developing countries transition to low-carbon and climate-resilient growth. This assessment addresses German efforts to provide “fast start finance” (FSF) as a contribution to the pledge by developed countries to provide USD 30 billion from 2010 to 2012 under the United Nations Framework Convention on Climate Change (UNFCCC). It is part of a series of studies scrutinizing how developed countries are defining, delivering, and reporting FSF.

Germany has increased climate finance in recent years and met its self-defined FSF pledge. According to the government’s FSF reporting, from 2010-2012 Germany provided a total of EUR 1.29 billion (approximately USD 1.7 billion) for climate action in developing countries that was counted towards FSF. Germany has therefore slightly exceeded its FSF pledge for the period 2010-2012. Even before the start of the FSF period, Germany was already providing significant funding for climate change-related activities in developing countries, particularly for renewable energy and energy efficiency. It therefore started from a relatively high climate finance baseline. Moreover, FSF is only a part of what the German government provides in climate-related finance for developing countries. Overall, Germany has increased delivery of international climate finance when compared to climate-related spending prior to the FSF period: In 2011, Germany committed about EUR 1.8 billion in total for climate finance, an increase from EUR 470 million in 2005.

Germany’s FSF is roughly evenly distributed be¬tween bilateral and multilateral cooperation. Out of the EUR 1.29 billion, EUR 585 million was channelled through multilateral funds. The largest single channel is the World Bank-administered Climate Technology Fund (CTF), which received EUR 375 million from Germany from 2010-2012. Substantial amounts of funding were also transferred to adaptation-related multilateral funds and the Forest Carbon Partnership Facility. Two federal ministries, the German Federal Ministry Economic Coop¬eration and Development (BMZ), and the German Federal Ministry Environment, Nature Conservation and Nuclear Safety (BMU), are responsible for the disbursement of FSF resources. Nearly half of this funding has been channelled through the German development cooperation agencies GIZ and KfW. Relatively few resources were delivered directly to developing country domestic institutions.

Germany FSF has primarily supported general mitigation (45 percent), and efforts to reduce emissions from deforestation and degradation (26 percent), while 28 percent supports adaptation. Germany aimed to provide 50 percent of its climate finance for mitigation, 33 percent for adaptation activities, and 27 percent (EUR 350 million) for REDD+. The Copenhagen Accord sought a balance between adap¬tation and mitigation (including REDD+) during the FSF period. Adaptation has received less finance than expected at the outset of the FSF period. Overall, most German FSF resources have been allocated to the regions of Africa (34 percent) and Asia (29 percent). Additionally, roughly 60 percent of all adaptation finance and 50 percent of bilateral adaptation finance has been allocated to Small Island Developing States, Least Developed Countries, and African countries.

The majority of Germany’s FSF is provided through grants. Loans are provided to the CTF, and account for about 29 percent of the overall FSF contribution. Germany is relatively transparent about its FSF. Through BMU and BMZ, the German government publishes lists of the FSF projects it supports, reporting on the recipient country, project name, project description, objective, amount, implementing agency, financial instrument, and expected project duration. It also reports to the European Commission (EC) on an annual basis. In addition, Germany has commissioned a study on lessons learned from FSF for long-term finance. However, official reporting would be strengthened through the inclusion of information on the actual disbursements and on project impact.

Germany is one of the few countries which has applied and published a specific definition of “new and additional” for its FSF. Germany only counts those funds towards FSF which were committed in addition to a 2009 baseline (as part of Official Development Assistance, or ODA, spending) and/or which are generated by new financing sources, namely the auctioning revenues under the EU ETS. Nonetheless, some of the financial resources counted as FSF were pledged before the FSF period: for example, Germany pledged finance to the CIFs in 2008, but only funding delivered from 2010 onwards was counted as FSF. All German FSF is counted towards ODA. However, Germany has yet to meet its commitment to provide 0.7 percent of its Gross National Income as ODA, and in fact its ODA contributions have recently declined. Also, Germany’s climate finance is committed in the context of a complementary commitment to scale up finance for biodiversity under the Convention on Biodiversity (CBD). It will be important to monitor reporting against both of these commitments in order to understand whether pledges have been duplicated or recycled.

Most of the projects counted towards FSF seem to have a principal or at least significant climate objective. An independent application of the Organisation for Economic Development (OECD) climate markers to the FSF projects suggests that the vast majority of projects seems to have a clear climate element, based on limited project informaiton. However, a focus on only bilateral projects reveals that the share of principally climate-driven projects may be lower than bilateral projects committed to other climate objectives. Furthermore, an assessment of the incremental climate change costs that are covered through the projects is not available.

Germany is one of the few developed countries to have committed climate finance beyond the FSF period. At COP18, Germany pledged to deliver EUR 1.8 billion in climate finance in 2013, an increase from the EUR 1.4 billion delivered in 2012.1 These funds will come from the general budget and from the “Sondervermögen Energie und Klimafonds” (“Special Energy and Climate Fund”). This separate budget structure is financed by auctioning revenues from the EU Emission Trading Scheme (EU ETS). The current low prices of carbon, however, may reduce available climate finance beyond 2012.

With regard to reporting on international climate finance, we suggest the following actions to further in¬crease transparency:

With regard to Germany’s international climate finance approach as a whole, we offer the following recommendations: