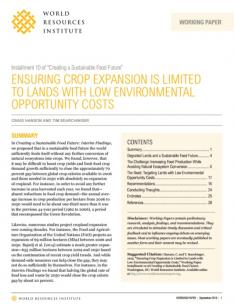 Installment 10 of Creating a Sustainable Food Future proposes a definition for lands with low environmental opportunity cost. From there, it offers recommendations for how any new cropland expansion can be directed toward these lands.

In Creating a Sustainable Food Future: Interim Findings, we proposed that in a sustainable food future the world sufficiently feeds itself without any further conversion of natural ecosystems into crops. We found, however, that it may be difficult to boost crop yields and limit food crop demand growth sufficiently to close the approximately 70 percent gap between global crop calories available in 2006 and those needed in 2050 with absolutely no expansion of cropland. For instance, in order to avoid any further increase in area harvested each year, we found that—absent reductions in food crop demand—the annual average increase in crop production per hectare from 2006 to 2050 would need to be about one-third more than it was in the previous 44-year period (1962 to 2006), a period that encompassed the Green Revolution. Likewise, numerous studies project cropland expansion over coming decades. For instance, the Food and Agriculture Organization of the United Nations (FAO) projects an expansion of 69 million hectares (Mha) between 2006 and 2050. Bajzelj et al. (2014) estimate a much greater expansion—655 million hectares between 2009 and 2050 based on the continuation of recent crop yield trends. And while demand-side measures can help close the gap, they may not do so sufficiently by themselves. For instance, in the Interim Findings we found that halving the global rate of food loss and waste by 2050 would close the crop calorie gap by about 20 percent.

New cropland historically has come from the conversion of forests, grasslands, and wetlands. However, such conversion generally has high environmental and social impacts. It typically releases greenhouse gas emissions otherwise stored in vegetation and soils, reduces wildlife habitat, and disrupts watershed protection benefits, to name a few. Moreover, conversion can displace people who live in those ecosystems or trigger social conflict with communities that depend on the natural ecosystem. Finding alternative locations for any inevitable cropland expansion is therefore urgent.

One commonly suggested option is to focus future cropland expansion toward “marginal” or “degraded lands.” There are several challenges associated with the concept of degraded land, however, that make this solution not as straightforward as it might seem at first glance. First, there is little consensus on the definition of “degraded land.” Second, estimates of degraded land extent and location vary widely and often do not overlap. Third, much of the land typically characterized as degraded is already cropland and therefore by definition cannot be a candidate for cropland expansion (the focus of this working paper)—but rather are candidates for restoring crop productivity on existing croplands (which we encourage). Restoring degraded cropland into greater productivity is a very important strategy for boosting food production, but it cannot be considered a “new” source of cropland. Fourth, although the phrase might connote vast tracts of uninhabited or unutilized land, degraded lands are not necessarily vacant areas that are unused by people or that fail to provide benefits. Fifth, there appears to be a “race for degraded lands” among a variety of interests, including those seeking to boost food production, increase wood product supplies, advance bioenergy, and restore native ecosystems. In other words, the same land is being sought for multiple purposes.

Beyond invoking “degradation,” other attempts to identify areas suitable for crop expansion often identify lands whose conversion would have high environmental impacts or forgone benefits. These land categories sometimes include: (1) “potentially arable” land that is not now farmed except dense forests, (2) wet savannas, (3) grazing lands, (4) secondary forests, and (5) abandoned farmland. Considering these land types as always or inherently appropriate for cropland expansion leads to overestimates of the amount of land available for sustainable cropland expansion, creating unrealistic expectations.

To accommodate any cropland expansion in a manner consistent with a sustainable food future, we need to circumvent the ambiguity and other challenges related to the concept of “degraded land” and avoid misconstruing as inherently appropriate for cropland expansion lands whose conversion would have relatively high environmental impacts. One approach is to limit any expansion of cropland to lands with low environmental opportunity costs. This concept acknowledges that there are nearly always opportunity costs to expanding crops onto a tract of land—the opportunity to use that land for some other purpose or to merely let it regenerate into something eventually approaching its native ecosystem. Although borrowed from the world of economics, “opportunity costs” in this working paper focus on forgone environmental benefits.

Our working definition is that lands with low environmental opportunity costs are those that simultaneously meet at least four criteria:

The extent of lands with low environmental opportunity costs is uncertain. We have not yet conducted a global mapping analysis. Yet given our strict criteria, our hypothesis is that only modest amounts of land will qualify.

Tracts of land that do meet these four criteria should then be assessed against a set of non-biophysical considerations that determine whether the tract should or even could be converted into cropland. These considerations include:

Failure to meet criteria 5, 6, and 7 does not mean that a tract of land should necessarily be removed from consideration since steps could be taken to improve performance against those criteria. For example, introducing economic incentives could improve economic viability. Changing land use zoning could make tracts legally available. And improving the benefits local people gain could make conversion to crops more socially acceptable.

The second set of measures would facilitate use of lands with low environmental opportunity costs. For farmers to use these areas for crops, the lands need to be available from a legal, economic, and social perspective. These measures include:

The relative importance of these measures will depend on the particular contextual circumstances of the tract of land being considered. And the second and third set of measures are generally important for encouraging sustainable agricultural intensification on existing cropland and grazing lands, too. Combined, all three groups of measures could help direct any cropland expansion toward lands with low environmental opportunity costs, thereby helping contributing to the menu for a sustainable food future.