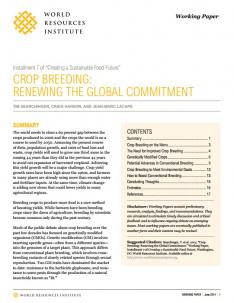 This working paper concludes with a series of recommendations on how to accelerate yield gains through these approaches.

The world needs to close a 69 percent gap between the crops produced in 2006 and the crops the world is on a course to need by 2050. Assuming the present course of diets, population growth, and rates of food loss and waste, crop yields will need to grow one third more in the coming 44 years than they did in the previous 44 years to avoid net expansion of harvested cropland. Achieving this yield growth will be a major challenge. Crop yield growth rates have been high since the 1960s, and farmers in many places are already using more than enough water and fertilizer inputs. At the same time, climate change is adding new stress that could lower yields in many agricultural regions.

Breeding crops to produce more food is a core method of boosting yields. While farmers have been breeding crops since the dawn of agriculture, breeding by scientists became common only during the past century. Much of the public debate about crop breeding over the past few decades has focused on genetically modified organisms (GMOs). Genetic modification (GM) involves inserting specific genes—often from a different species—into the genomes of a target plant. This approach differs from conventional plant breeding, which involves crossbreeding variants of closely related species through sexual reproduction. Two GM traits have dominated the market to date: resistance to the herbicide glyphosate, and resistance to some pests through the production of a natural insecticide known as “Bt.”

The benefits and challenges of genetically modified crops have attracted enormous public attention, primarily around four issues: food safety, toxicity and pest resistance, crop yield effects, and shifts in profits and control to major corporations. Although the merits of existing GM crops can be debated, GM technology may offer other useful potential benefits, particularly traits that help crops resist diseases that cannot be addressed by any other means.

Despite the public attention to GM crops, conventional breeding has been and will probably continue to be the dominant means of increasing crop yields for the foreseeable future. Although some ambitious GM research programs are trying to alter complicated gene combinations, GM technology currently aims at traits controlled by a single gene or a small number of genes. Yet most traits that lead to higher yields result from a large number of genes and their interactions with environmental factors. It is through conventional methods that breeders can affect such a large number of genes.

Recent advances in molecular biology are assisting conventional breeding and have the potential to accelerate yield gains. One advance is marker-assisted breeding, which involves mapping portions of plant DNA associated with agronomically useful traits. Mapping makes it possible to screen a large population of seedlings quickly to determine which have the desired gene combinations without having to sow large numbers of seeds or wait for individual plants to grow. This method allows breeders to skip cycles of crossing individuals, thereby realizing yield improvements more quickly. Another advance is genomics-assisted breeding, which applies DNA sequencing and mapping to the complete set of DNA within a single cell of a plant. Genomics holds the promise of unveiling the complex combinations of genes that confer desirable crop traits, thereby enabling breeders to screen for plants that have them and saving research time. Both marker assistance and genomics work within conventional breeding programs.

As marker assistance and genomics continue to speed up conventional breeding, agricultural researchers should increase attention to crops that have received relatively little research—“orphan crops.” Orphan crops include sorghum, millet, potatoes, peas, and beans, all of which are important food sources for many people in food-insecure regions. The marginal yield improvement potential of such crops is probably high given the limited research efforts to date. Marker assistance and genomics should make it easier to achieve quick yield improvements in these less-studied crops in two ways. First, these technologies can increase the pace of breeding programs. Second, they make it possible for breeders to understand the gene combinations that have already led to yield gains in more intensely studied crops such as maize, rice, and wheat. Breeders can then select for these advantageous gene combinations in the orphan crops to achieve yield gains.

The combination of the great need for crop yield growth over coming decades and the availability of new technologies makes a strong case for improving crop breeding. We offer five recommendations to achieve this improvement: