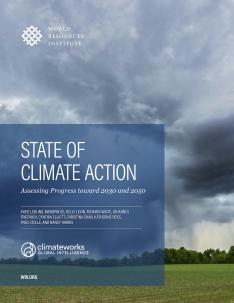 To keep the window open to limit global warming to 1.5 C, countries need to accelerate transformation towards a net-zero emissions future across all sectors at a far faster pace than recent trends, according to this report from World Resources Institute and ClimateWorks Foundation, with input from Climate Action Tracker.

For example, the report finds that to get on track for the emission cuts required by 2030, the world needs to:

The rapid transformation needed to halve emissions by 2030 will require significant financial investments, technology transfer and capacity-building for developing countries. While climate finance has increased significantly in recent years across the public, private and philanthropic sectors, it is still not at the scale needed to revolutionize our energy and transportation systems, accelerate energy efficiency and protect forests. Estimates indicate that between $1.6 and $3.8 trillion per year will be needed through 2050 to transform the energy system alone.

Experience has shown that transformative change can happen at an exponential, non-linear rate. Systemic changes that once seemed impossible have ultimately been achieved, such as technological advances with cars, phones and computers. A rapid transition to a zero-carbon future offers the same opportunity — but only with smart and proactive investments in key sectors.

The report outlines opportunities within all six sectors to align emissions trajectories with what the science suggests is necessary to avoid the worst climate impacts. Countries, businesses, philanthropy and others must urgently put in place policies, incentives and financial investments to accelerate us toward that safer, prosperous and more equitable future.