How Virginia Can Meet Its Clean Power Plan Targets 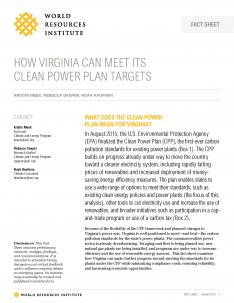 This fact sheet examines how Virginia can use its existing policies and infrastructure to meet its emission standards under the Clean Power Plan while minimizing compliance costs, ensuring reliability, and harnessing economic opportunities. Read about additional analyses in WRI's fact sheet series, How States Can Meet Their Clean Power Plan Targets.

Virginia’s planned coal retirements and planned investment in clean energy will achieve almost one-third of the reductions its power plants must make between 2012 and 2030 to meet its mass-based target. Virginia can close the gap that remains, and even surpass its mass-based target for existing plants, if it achieves its clean energy goals and increases utilization of its existing natural gas fleet:

Virginia can develop an implementation plan that maximizes the economic benefits to the state and achieves emission reductions cost effectively by:

Virginia has taken some steps to scale up renewable energy and energy efficiency, but a huge opportunity lies ahead to build on its progress and achieve deeper, cost-effective emissions reductions. If it takes advantage of available infrastructure and underutilized clean energy resources, Virginia will be in a good position to surpass EPA’s standards for its existing power plants while maintaining grid reliability. Adopting EPA’s new source complement standard would further incentivize zero-carbon generation sources and ensure that future CO2 emissions from the state’s power sector do not continue to increase. These types of actions could create a new revenue stream for the state, lead to increased investment, and would make Virginia a clean-energy leader.