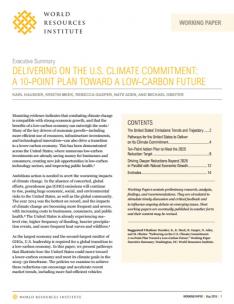 This working paper examines where greenhouse gas emissions are headed if the United States does not take any new action to curb their release, how it can meet its 2025 emissions target using existing authorities and state action, and how legislation can achieve deeper cuts over the longer term while still growing the economy.