How Illinois Can Meet Its Clean Power Plan Targets 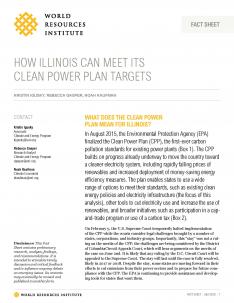 This fact sheet examines how Illinois can use its existing policies and infrastructure to meet its emission standards under the Clean Power Plan while minimizing compliance costs, ensuring reliability, and harnessing economic opportunities. Read about additional analyses in WRI's fact sheet series, How States Can Meet Their Clean Power Plan Targets.

Illinois can build on its progress to date and achieve greater reductions by taking the following four actions:


Illinois could meet—or even exceed—its mass-based emission targets by adjusting or removing the spending cap on efficiency while increasing the target to achieve about 20 percent cumulative energy savings by the end of 2025 and increasing the renewable energy standard to 35 percent of the state’s sales by 2030, in line with the state’s bipartisan Clean Jobs Bill. Doing so would cut CO2 emissions by 76 percent below 2012 levels by 2030.

Illinois can develop an implementation plan that maximizes the economic benefits to the state and achieves emission reductions cost-effectively by:


Even with the stay on the Clean Power Plan, Illinois has every reason to move forward with its transition to a low-carbon power sector. By expanding its clean energy policies and addressing current barriers, Illinois would be ahead of the game when EPA is able to move forward with regulating carbon pollution from power plants. At the same time, the state would be able to scale up the benefits from these policies, reduce the need to invest in other states’ power sectors, and achieve deeper carbon emissions reductions more cost-effectively.

On August 3, 2015, EPA finalized standards for existing power plants that will help drive additional CO2 emission reductions by 2030. EPA developed these state-specific standards by taking into account each state’s existing fossil fleet along with an estimate of the potential to increase the existing coal fleet’s efficiency, ramping down coal generation by increasing the utilization of the existing natural gas combined cycle fleet, and developing more renewable energy resources. The Clean Power Plan enables states to use a wide range of options to meet their standards, such as existing clean energy policies and electricity infrastructure (the focus of this analysis), other tools to cut electricity use and increase the use of renewables, and broader initiatives such as participation in a cap-and-trade program or use of a carbon tax. While the U.S. Supreme Court has temporarily halted CPP implementation while the courts consider legal challenges, this stay is not a reason for Illinois to stop planning for a lower-carbon power sector.