How Pennsylvania Can Meet Its Clean Power Plan Targets 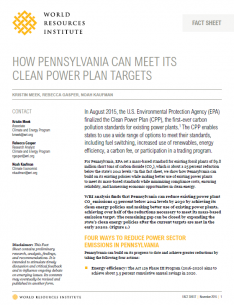 This fact sheet examines how Pennsylvania can use its existing policies and infrastructure to meet its emission standards under the Clean Power Plan while minimizing compliance costs, ensuring reliability, and harnessing economic opportunities. Read about additional analyses in WRI's fact sheet series, How States Can Meet Their Clean Power Plan Targets.

Pennsylvania can build on its progress to date and achieve greater reductions by taking the following four actions:

Pennsylvania could meet—or even exceed—its mass-based emission targets by adjusting or removing the spending cap on efficiency programs while increasing the target to achieve about 13.2 percent cumulative annual savings by 2030 and increasing the Tier I alternative energy standard to 18 percent of the state’s sales by 2030. Doing so would cut CO2 emissions by 46 percent below 2012 levels by 2030. Pennsylvania can develop an implementation plan that maximizes the economic benefits to the state and achieves emission reductions cost-effectively by:

Pennsylvania’s clean energy policies are already cutting CO2 emissions and other harmful air pollution while saving money for the state’s residents. However, to meet its CPP targets, Pennsylvania would not only need to take make better use of existing power plants but also expand Act 129 and AEPS past their current 2020-21 targets. Doing so would allow the state to scale up their benefits, reduce the need to invest in new natural gas plants, and achieve deeper reductions more cost-effectively. Adopting EPA’s new source complement target would further incentivize zero-carbon generation sources and ensure that future CO2 emissions from the state’s power sector do not continue to increase.

How Virginia Can Meet Its Clean Power Plan Targets