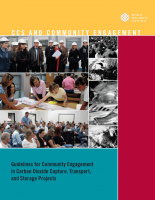 This report was designed to provide guidance to Carbon Capture and Storage (CCS) project developers, regulators, and local communities as they engage in discussions regarding potential CCS projects.

Carbon dioxide capture and storage (CCS) encompasses a suite of existing and emerging technologies for capture, transport, and storage of carbon dioxide (CO2) that together can be used to reduce the greenhouse gas emissions from fossil fuel power generation and other industrial sources. Achieving cuts in energy-related CO2 emissions is critical to avoiding more than a 1.5 degree Celsius (°C) (2.7 degree Fahrenheit [° F]) rise in global temperatures by 2050 and the irreversible and damaging impacts such a temperature rise would have on people and ecosystems. The scale of the climate change challenge requires a portfolio of clean energy technologies and energy efficiency efforts, and most credible analyses project that CCS will have to play a substantial role in achieving the necessary emissions reductions (see Appendix 3).

CCS has been tested at a small scale, and there are a few industrial operations around the world, including in North America and Europe, which already capture and store small quantities of CO2 emissions underground. However, the technology has not yet been demonstrated at the scale required for application to commercial power and industrial plants. To address this gap, governments of many major economies have announced plans to support commercial-scale CCS demonstration projects that store more than 1 million metric tons of CO2 annually. Several are currently being built in Europe, China, Australia, and Canada, and many more are in the planning stages, including in the United States. Leading industrial nations, through the G8, have called for 20 such demonstration plants to be launched by 2010, with a view toward broad deployment by 2020.

Actions taken to demonstrate transformational clean energy technology over the next decade will define the solutions available to help solve the climate problem. Commercial-scale CCS demonstration projects are required to demonstrate whether or not the technology should play a major role in bridging today’s fossil fuel–driven world and tomorrow’s low- or zero-carbon economy. Yet, as with the introduction of many new technologies, proposed CCS projects have been met with mixed reactions from the public, and in particular from the local communities asked to host them.

Community Engagement in the CCS Context

Project developers and technical experts in CCS often cite the public as a “barrier” to CCS deployment, because decisions on whether individual projects move forward often significantly depend on the local community’s acceptance or opposition. The case studies from the United States, the Netherlands, and Australia featured in this report suggest that communities often have more concerns and questions about CCS than about more established industries and technologies. The guidelines for community engagement, however, were written with the belief that decisions on individual demonstration projects ultimately hinge on site-specific factors, including the needs of the local community. While much social science research around CCS to date has focused on gauging public attitudes toward the technology or on education and outreach best-practices for project developers (see Appendix 2), we focus instead on providing recommendations for creating a culture of effective, two-way community engagement around CCS projects.

In addition to project developers and host communities, there is a third partner essential to effective community engagement around CCS: regulators. In some countries, regulatory frameworks governing CCS development and deployment, including rules for community engagement, are already in place (see Appendix 1). In others, an environmental regulatory framework for CCS does not yet exist, and the advent of demonstration plants is forcing regulatory policymakers to make real-time decisions about how to ensure projects move forward safely, and what level of public participation should be required in the decisionmaking processes. The engagement around any one project, therefore, is contingent on the interactions of three primary groups: local decisionmakers (typically on behalf of those in the community), regulators, and project developers. All three groups are addressed in this report. It is important to underscore upfront, however, that effective community engagement is measured by the success of the engagement process, and is not contingent upon agreement between the project developer, regulator, and community on the outcome or the design of the CCS project. Nevertheless, effectively engaging communities can help move CCS projects forward and foster continuing constructive relationships between project developers and communities. Such relationships can help ensure that commercial-scale CCS demonstrations and any subsequent commercial projects progress in such a way that local economies, values, ecosystems, and people are respected, and the potential of the technology in helping to mitigate climate change is fully realized.

The Guidelines was drafted by authors at WRI in close consultation with an international group of stakeholders (see inside front cover) with specific expertise and experience in engaging local communities regarding deployment of CCS technology. This effort builds on WRI’s previous 2-year consensus-building stakeholder effort that resulted in the Guidelines for Carbon Dioxide Capture, Transport, and Storage, a set of technical guidelines for how to responsibly proceed with safe CCS projects. The community engagement guidelines for CCS are intended to serve as international guidelines for regulators (including those in both regulatory policy design and implementation capacities); local decisionmakers (including community leaders, citizens, local advocacy groups, and landowners); and project developers to consider as they plan and seek to implement CCS projects.

The Guidelines begins with an introduction that describes their intent, a working definition of community engagement, and why effective engagement is an essential element of CCS deployment. It then provides an overview of relevant CCS technology issues, including the status of CCS technology, regulatory and permitting processes, and the timeline and various stages of a representative CCS project. The report then reviews existing relevant experience in community engagement, presented in six case studies from CCS projects. These studies were drafted by stakeholders engaged in the development of the Guidelines who had a hands-on role either in engaging the local community or in decisionmaking around the featured project. Chapter 4 of the report presents the guidelines for community engagement on CCS.

This effort was initiated with a hope of providing a set of best practices to guide the engagement of future commercial CCS projects, if the demonstration projects prove successful. The guidelines for regulators are designed to guide regulatory authorities responsible for overseeing CCS projects but also offer recommendations for improving the public participation rules as new regulations are drafted. The guidelines for local decisionmakers highlight how, in some cases, communities can take a proactive role in shaping the engagement around a potential CCS project, rather than a passive role as purely receiver of information. Finally, the guidelines for project developers highlight principles and activities that can be employed to promote effective community engagement and involve the local community in the CCS project.

Carbon Dioxide Capture and Storage and the UNFCCC

A Seat at the Table