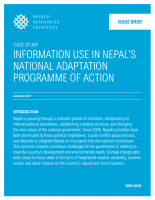 The Nepalese government lacks crucial information and evidence necessary for climate change adaptation decision making. Despite this challenge, there has been significant movement around climate change adaptation in the country, most notably the successful development of the National Adaptation Programme of Action (NAPA) in September 2010 by the Ministry of Environment. This case study examines how Nepal’s NAPA process identified urgent and immediate priorities in a situation of significant data gaps and uncertainty.

Nepal is passing through a turbulent period of transition, reorganizing its internal political boundaries, establishing a federal structure, and changing the very nature of the national government. Since 2008, Nepal’s priorities have been dominated by these political imperatives, a post-conflict peace process, and attempts to integrate Maoist ex-insurgents into the national mainstream. This dynamic presents numerous challenges for the government in seeking to meet the country’s development and environmental needs. Climate change adds extra stress to these needs in the form of heightened weather variability, extreme events, and other impacts on the country’s natural and social systems.

This case study is part of a series under the World Resources Institute project, Information for Climate Adaptation in South Asia: Identifying User Needs. Each of the case studies in this set explores an aspect of information use in adaptation decision making. The goals of this series are two-fold:

This case study series was supported by the UK Department for International Development. Case study authors used the same framework of guiding questions for their research, which consisted of literature reviews and interviews.