Carbon Dioxide Capture and Storage and the UNFCCC 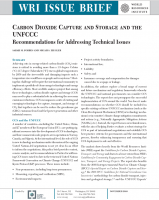 Achieving cuts in energy-related carbon dioxide (CO2) emissions is critical to avoiding more than a 1.5 degree Celsius (°C) (2.7 degree Fahrenheit [°F]) rise in global temperatures by 2050 and the irreversible and damaging impacts such a temperature rise would have on people and ecosystems. Meeting this challenge will require the international community to implement a portfolio of clean energy technologies and energy efficiency efforts. Most credible analyses project that among these technologies, carbon dioxide capture and storage (CCS) may need to play a substantial role in achieving the necessary emissions reductions. CCS encompasses a suite of existing and emerging technologies for capture, transport, and storage of CO2 that together can be used to reduce the greenhouse gas (GHG) emissions from fossil fuel power generation and other industrial sources.

CCS and the UNFCCC

A number of countries - including the United States, China, and 27 members of the European Union (EU) - are putting significant resources into the development of CCS technologies, and four commercial-scale projects are in operation in Norway, Canada, and Algeria. At the international level, the role of CCS in new technology mechanisms under discussion at the ongoing United Nations-led negotiations is not yet clear. In an effort to inform the negotiations, this policy brief provides context, concise analysis, and recommendations to Parties for addressing CCS issues raised to date in the twin track United Nations Framework Convention on Climate Change (UNFCCC) and Kyoto Protocol (KP) processes. These issues include:

In addition, the authors explore a broad range of current and future mechanisms and regulatory frameworks whereby the UNFCCC and national governments can consider CCS technologies. The report does not presuppose the successful implementation of CCS around the world. Nor does it make recommendations on whether CCS should be included in specific existing or future UNFCCC mechanisms (such as the Clean Development Mechanism [CDM] or technology mechanisms) or in countries’ climate change mitigation commitments and actions (e.g., Nationally Appropriate Mitigation Actions [NAMAs], etc.). Instead, the report focuses on technical issues, with the aim of helping Parties evaluate a robust strategy for CCS as part of international negotiations and establish CCS best practice criteria for governments and the international process, thereby enhancing transparency and ensuring that CCS deployment is safe and effective.