Building Blocks for a Low-Carbon Economy: Catalytic Policy and Infrastructure for Decarbonizing the United States by 2050

This working paper identifies key climate policies and investments and estimates their emissions-reduction potential and associated costs, which can enable the United States to reduce economy-wide greenhouse gas (GHG) emissions by 50–52% compared to 2005 levels by 2030 and reach net-zero GHG emissions by midcentury, the goals set by the Biden administration. 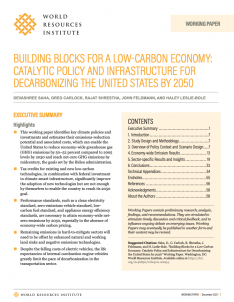 This Working Paper is part of the U.S. Climate Initiative within our Climate Program. Contact Devashree Saha for more information.

This Working Paper is part of the U.S. Climate Initiative within our Climate Program. Contact Devashree Saha for more information.

Decarbonizing the U.S. economy to achieve a 50–52% reduction in greenhouse gas emissions by 2030 and net-zero emissions by midcentury will require the accelerated deployment of existing low-carbon technologies as well as new technologies that are not yet commercially available. Furthermore, even as low-carbon technologies continue to become more cost-competitive, their pace of deployment needs to increase rapidly. Federal policies and investments are needed to drive technology deployment and market transformation, change consumer behavior, and encourage investment in infrastructure and key technologies needed for a net-zero economy. This working paper identifies near-term policies and federal investments that can catalyze emissions reductions this decade and set up the economy for deeper emissions reductions in later decades. The analysis compares the progress toward a net-zero goal offered by different policy packages that overlap and build on one another, which are modeled under three mitigation scenarios. The paper focuses on the role played by tax incentives, infrastructure investments, targeted spending, and sector-specific performance standards as building blocks for a successful decarbonization strategy.

1. Tax credits for existing and new low-carbon technologies, in combination with federal investment in climate-smart infrastructure, significantly improve the adoption of new technologies but are not enough by themselves to enable the country to reach its 2050 goal.

3. Remaining emissions in hard-to-mitigate sectors will need to be offset by enhanced natural and working land sinks and negative emissions technologies.

4. Decarbonizing the U.S. economy is economically feasible. With reference oil prices, net costs are $40 billion (0.2 percent of U.S. gross domestic product [GDP]) higher in 2030 than in the Reference Scenario (RS). By 2050, net costs are $113 billion less than in the reference case, meaning there is a net savings of 0.3 percent of U.S. GDP. Net costs vary with fuel price assumptions but are affordable in all cases.

Achieving Net-zero Emissions: Can the Build Back Better Act Help Get There?

The Economic Benefits of the New Climate Economy in Rural America

How Climate Action Can Reboot Economies in Rural America

INSIDER: Designing Low-carbon Product Standards for Cement and Steel in the United States

Toward a Tradable Low-Carbon Cement Standard: Policy Design Considerations for the United States

Toward a Tradable, Low-Carbon Product Standard for Steel: Policy Design Considerations for the United States