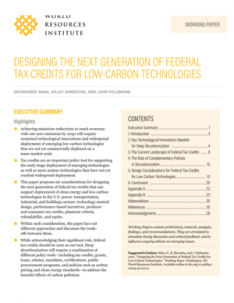 This publication is part of the U.S. Climate work of WRI United States. Contact Devashree Saha for more information.

This publication is part of the U.S. Climate work of WRI United States. Contact Devashree Saha for more information.

Achieving emissions reductions to reach economywide net-zero emissions by 2050 will require sustained technological innovations and widespread deployment of emerging low-carbon technologies that are not yet commercially deployed on a mass-market scale. Tax credits are an important policy tool for supporting the early-stage deployment of emerging technologies as well as more mature technologies that have not yet reached widespread deployment. While existing federal tax credits have played an important role in enabling the deployment of several low-carbon technologies, including wind, solar, and electric vehicles, they also suffer from critical design deficiencies that make them less effective.

This paper proposes six considerations for designing the next generation of federal tax credits that can support deployment of clean energy and low-carbon technologies in the U.S. power, transportation, industrial, and buildings sectors. Within each consideration, the paper lays out different approaches and discusses the tradeoffs between each.

Tax credits have been discussed as a method of fostering a supportive environment for early-stage deployment of cutting-edge technologies, including advanced modular nuclear reactors, direct air capture, long-duration energy storage, carbon capture, utilization, and storage, and hydrogen made from renewable energy (green hydrogen) or from natural gas combined with carbon capture (blue hydrogen), as well as technologies that are commercially available but have not reached widespread deployment, such as electric vehicles and heat pumps.

To date, Congress has been stuck in a repeated cycle of extending expired or expiring tax credits for low-carbon technologies, perpetuating uncertainty and discouraging long-term planning by the private sector. The current system needs to be replaced with a predictable, forward looking tax credit regime that can lead to rapid economywide emissions reductions.

To address the decarbonization challenge effectively, the next generation of federal tax credits should include the following characteristics:

How each of the above considerations is included in the design of tax credits will have implications for their operation. Trade-offs are involved in choosing one approach over another. For instance, phasing out tax credits when a technology has reached a specified market share can prioritize innovation and minimize costs borne by taxpayers. However, if the goal is accelerating the pace of decarbonization, then making tax credits available to even mature low-carbon technologies (especially in the absence of any policy mechanism that addresses the externalities of carbon pollution) may be warranted.

Tax credits can be most effective when accompanied by complementary policies that work in tandem to move clean technologies from the emergence phase to the diffusion phase and finally to widespread adoption.

How the Clean Energy for America Act Improves Tax Credits

The US Set a Record for Renewables in 2020, but More Is Needed