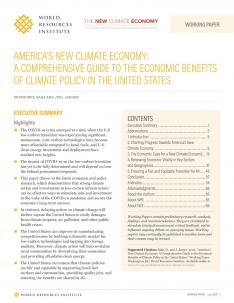 This Working Paper is part of the New Climate Economy within our Climate Program, and Economics Center. Reach out to Devashree Saha for more information.

This Working Paper is part of the New Climate Economy within our Climate Program, and Economics Center. Reach out to Devashree Saha for more information.

This working paper draws on the latest economic research to demonstrate how climate policy and investments in low-carbon infrastructure can reboot America’s economy and set it up for long-term success. On the other hand, delaying action on climate will further expose the United States to costly damages from climate impacts, air pollution, and public health crises.

The United States has made substantial progress towards a low-carbon economy over the past several years. Low-carbon technologies have become more efficient and affordable, and U.S. clean energy investment and deployment grew to new heights, creating millions of jobs. Whether this continues will depend on how the government responds to the COVID-19 crisis.

In addition, addressing climate change can allow the United States to secure a share in the booming domestic and global cleantech market by manufacturing and exporting low-carbon technologies. Moreover, it will help revitalize rural communities by diversifying rural economies and providing affordable clean energy.

Inequalities highlighted by the COVID-19 crisis make it clear that the United States must ensure that moving forward climate policies are fair and equitable by supporting fossil fuel workers and communities and ensuring the benefits of climate policies are shared by all.

12 Reasons Climate Action Is Good for the United States Economy

Resilience After Recession: 4 Ways to Reboot the U.S. Economy