2014: A Year of Temperature Records and Landmark Climate Findings 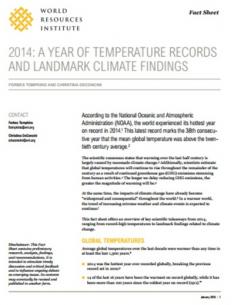 This fact sheet offers an overview of key scientific takeaways from 2014, ranging from record-high temperatures to landmark findings related to climate change.

According to the National Oceanic and Atmospheric Administration (NOAA), the world experienced its hottest year on record in 2014. This latest record marks the 38th consecutive year that the mean global temperature was above the twentieth century average.

Additionally, the impacts of climate change have already become “widespread and consequential” throughout the world, and the trend of increasing extreme weather and climate events is expected to continue with additional warming.

The scientific consensus states that warming over the last half century is largely caused by manmade climate change. Additionally, scientists estimate that global temperatures will continue to rise throughout the remainder of the century as a result of continued greenhouse gas (GHG) emissions stemming from human activities. The longer we delay reducing GHG emissions, the greater the magnitude of warming will be that increases our risk to the most disastrous impacts of climate change.

Sea-Level Rise and its Impact on Virginia

Heavy Precipitation in the U.S. and the Climate Change Connection