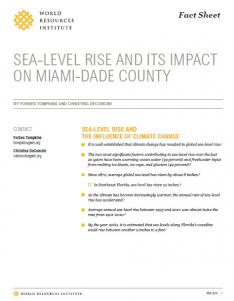 Miami-Dade County, Florida has more people living less than 4 feet above sea level than any U.S. state, except Louisiana.

Miami has the largest amount of exposed assets and the fourth-largest population vulnerable to sea-level rise in the world. Sea-level rise is already causing significant impacts in Miami-Dade County, where prolonged flooding from strong storms has become a frequent enough event that Miami Beach city officials are considering a $206 million renovation of their drainage system. With estimated beachfront property of more than $14.7 billion (not including infrastructure), and the expected need of more than 23 million cubic yards of beach renourishment (or the equivalent of more than 10,781 football fields covered in 1 foot of sand) over the next 50 years, the urgency to address the issue is dire. However, while being located at the frontlines of sea-level rise has presented Miami-Dade with these daunting challenges, the leadership and action being taken by local officials, governments, universities, and organizations have laid a foundation of planning, policy, and awareness that can be built upon to help ensure a sustainable future for the county and Southeast Florida.