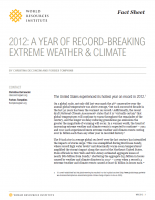 Stricken by record heat, wildfires, drought, and hurricanes, the United States endured devastating impacts from extreme weather and climate events in 2012. This fact sheet outlines the records broken by these extreme events, which are expected to become more frequent as the climate warms.

The United States experienced its hottest year on record in 2012.

On a global scale, not only did last year mark the 36th consecutive year the annual global temperature was above average, but each successive decade in the last 50 years has been the warmest on record. Additionally, the recent draft National Climate Assessment states that it is “virtually certain” that global temperatures will continue to warm throughout the remainder of the century, and the longer we delay reducing greenhouse gas emissions the greater the magnitude of warming will occur. In a warmer world, the trend of increasing extreme weather and climate events is expected to continue – 2011 and 2012 each experienced more extreme weather and climate events costing over $1 billion each than any other year in recorded history.

The 8-inch rise in average global sea level over the last century has intensified the impacts of storm surge. This was exemplified during Hurricane Sandy, where record high water levels and abnormally warm ocean temperatures amplified the storm’s impact along the coast of the Northeast United States. State officials in New York and New Jersey estimated aggregate losses of nearly $80 billion from Sandy, shattering the aggregate $55 billion in losses caused by weather and climate disasters in 2011 – a year when a record 14 extreme weather and climate events caused at least $1 billion in losses each.