Sea-Level Rise and its Impact on Virginia 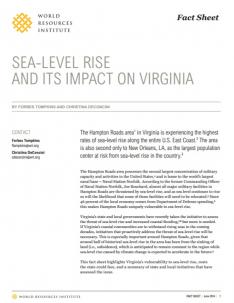 The Hampton Roads area in Virginia is experiencing the highest rates of sea-level rise along the entire U.S. East Coast. The area is also second only to New Orleans, LA, as the largest population center at risk from sea-level rise in the country.

This fact sheet provides information specific to the impacts of sea-level rise in Virginia, vulnerability to future sea-level rise within the state, and initiatives being taken in the state to assess the issue.

The combination of rising seas and sinking land are causing areas in Virginia, like Hampton Roads, to become the most threatened by sea-level rise in the United States. Since the late 1920s, sea-level in places like Sewells Point, VA, has risen by more than 14 inches and contributed to places like the Norfolk-Virginia Beach Metropolitan Area becoming 10th in the world in value of assets exposed to an increase in flooding from sea-level rise. Almost all major military facilities in Hampton Roads, which includes the largest naval base in the world, are threatened by sea-level rise. Local, state and regional efforts are being made to assess and address the issue, but more is needed to ensure coastal communities in Virginia can withstand the impacts of sea-level rise in the coming decades.