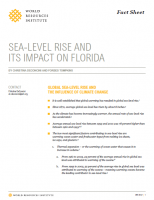 As climate change has resulted in sea level rise, its impacts on states like Florida are profound. This fact sheet examines those impacts as well what county governments and others are doing to respond.

It is well-established that global warming has resulted in global sea-level rise. Since 1870, average global sea level has risen by about 8 inches. As the climate has become increasingly warmer, the annual rate of sea-level rise has accelerated. Average annual sea-level rise between 1993 and 2011 was 78 percent higher than between 1961 and 1993.

Four county governments in Southeast Florida, in response to impacts of sea-level rise, established the Southeast Florida Regional Climate Change Compact in January 2010. The purpose of this agreement between the county governments of Broward, Miami-Dade, Monroe, and Palm Beach Counties – which have a combined population of 5.6 million — is to develop mitigation and adaptation strategies through joint efforts and to actively inform critical policymaking and government funding decisions at the state and federal levels.