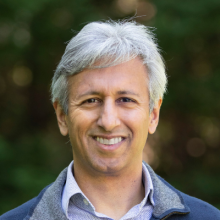 Manish Bapna no longer works at the World Resources Institute

Manish Bapna is the President and Chief Executive Officer of the Natural Resources Defense Council. He was the interim president and CEO of the World Resources Institute, a global research organization that works to address the urgent sustainability challenges related to food, forests, water, climate, energy, cities and the ocean.

Manish previously served as WRI’s executive vice president and managing director, with duties that included overseeing WRI’s programs, chairing WRI’s management team, and working to strengthen the impact of WRI research. In that role he led WRI’s efforts to establish offices in China, India and Brazil and helped launch WRI programs on cities, energy, finance and adaptation. He was a lead architect of several multi-stakeholder platforms including the NDC Partnership, New Climate Economy, Global Commission on Adaptation (where he was the team lead for the Commission’s flagship report released in late 2019) and the International Research Forum on the SDGs.

Before joining WRI in 2007, Manish was executive director of the non-profit Bank Information Centre (BIC), whose mission is to protect rights and promote sustainability in the projects and policies of international financial institutions.

Manish also served as a senior economist and task team leader at the World Bank, where he led multidisciplinary teams in designing and implementing water, watershed, and rural development projects in Asia and Latin America. Several of these projects received "excellence awards" by the Bank and were highly rated in independent evaluations. He joined the World Bank as a Young Professional. Earlier, he worked as a strategy consultant for McKinsey & Company in the financial services and technology industries.

As a recognized expert on international development, Manish has been cited in front-page articles in the New York Times, the Wall Street Journal and the International Herald Tribune. His op-eds are featured in major global and national papers, and he has testified numerous times before the U.S. Congress.

Manish is on the board of Meridian Institute and an Ambassador of the Open Government Partnership.

Manish received graduate degrees in business and political and economic development from Harvard and an undergraduate degree in electrical engineering from MIT. He is married to Geeta Nanda and they have two children, Laila and Arav.