Roundtable at the House Committee on Science, Space and Technology: Embracing a 21st Century, Low-Carbon Economy 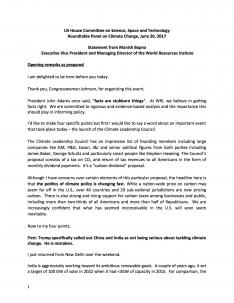 On June 20, Executive Vice President of the World Resources Institute Manish Bapna spoke to the House Committee on Science, Space and Technology at a roundtable about science and policy perspectives on climate change. Manish corrected the Trump administration’s misleading statements on climate economics, pointed to continued momentum for the Paris Agreement and called on Congress to give clear policy signals to the private sector. The roundtable was convened by Rep. Eddie Bernice Johnson of Texas, the ranking member of the committee, and also included remarks from Christiana Figueres, former head of the U.N. Framework Convention on Climate Change, David O’Sullivan, the EU Ambassador to the United States, and Jonathan Elkind, former assistant secretary for international affairs at the U.S. Energy Department.