Priorities for Supporting the Rural Poor in a Changing Climate 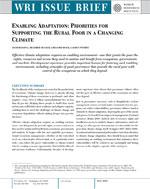 Supporting pro-poor climate adaptation begins by giving primacy to enabling activities that grant the poor the rights, resources and access they need to sustain and benefi t from their ecosystem assets.

Priority areas for investment include:

A. Strengthen an enabling environment at the national level.

B. Strengthen local institutions and good governance practices on the ground.

Effective climate adaptation requires an enabling environment—one that grants the poor the rights, resources and access they need to sustain and benefit from ecosystems, governments and markets. Development experience provides important lessons for fostering such enabling environments, including principles of good governance that provide the rural poor with control of the ecosystems on which they depend.

The livelihoods of the rural poor are rooted in the productivity of ecosystems. Climate change, however, is already altering the functioning of these ecosystems in profound—and often negative—ways. Over 2 billion rural inhabitants live on less than $2 per day. Helping these people to build their assets and incomes will bolster their resilience and adaptive capacity, enabling them to meet the challenges of climate change and ecosystem degradation without sinking deeper into poverty. But how?

Effective climate adaptation requires an enabling environment—one that grants the poor the rights, resources and access they need to sustain and benefit from ecosystems, governments and markets. It begins with fair and equitable governance. Sound ecosystem management—whether at the watershed level, on a shared plot of forest land, or of a particular water body—can reduce the poor’s vulnerability to climate-related risks by creating economic opportunities that build livelihoods and increase resilience. Unfortunately, decades of development experience have shown that governance failures often rob the poor of effective control of the ecosystems on which they depend.

Just as governance successes, such as Bangladesh’s cyclone management system or Guatemala’s community forestry program, can reduce vulnerabilities, governance failures stand as obstacles to climate adaptation, depriving the poor of the means and powers to benefit from improved management of natural resources (Batha 2008). Indeed, lack of resource rights and insufficient access to markets, finance, information, and technology are often greater determinants of vulnerability for the poor than climate change itself (Schipper 2007, Ribot 2009). As national and international policymakers turn their attention to climate change adaptation, they should keep in mind that constructing an enabling environment that minimizes these vulnerabilities will be central to any meaningful and lasting increase in the adaptive capacity of the rural poor.

This brief seeks to help fill this gap. It is formulated in response to an increasingly urgent need for articulating and agreeing upon a vision of effective adaptation—in part to inform the architecture for financing climate adaptation. The paper argues that the poor, and in particular the resource-dependent rural poor, must be a central concern in any effective adaptation funding effort, and that one of the major pillars of an effective adaptation strategy is support for an enabling environment that allows them to build their resilience through natural resource management.

The first section proposes that good governance and fair, representative institutions are crucial to help the rural poor adapt effectively to climate change. The second half of the brief proposes specific governance investments that adaptation funding should support.