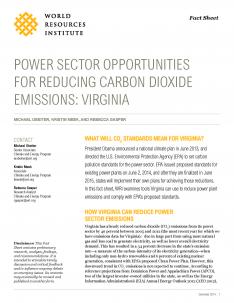 President Obama announced a national climate plan in June 2013, directing the U.S. Environmental Protection Agency (EPA) to set carbon pollution standards for the power sector. Once EPA establishes those standards, states will implement their own plans for achieving those reductions.

Virginia can meet almost 80 percent of EPA’s emission rate target for the state between 2020 and 2030 with its planned coal plant retirements, as well as using available infrastructure, including:

Virginia can get the rest of the way to its target by using more clean energy like: