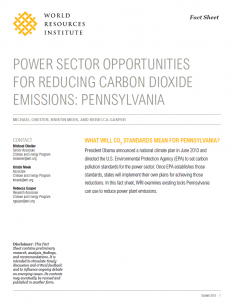 This Fact Sheet is part of the U.S. Climate within our Climate Program, and Energy Program. Reach out to Michael Obeiter for more information.

This Fact Sheet is part of the U.S. Climate within our Climate Program, and Energy Program. Reach out to Michael Obeiter for more information.

In this fact sheet, WRI examines how Pennsylvania can use its existing policies and infrastructure to reduce power plant emissions.

Although EPA has not yet announced what its power plant emissions standards will look like, WRI based its analysis on two hypothetical standards. Under these scenarios, Pennsylvania would be required to reduce its CO2 emissions in the range of 22 to 31 percent below 2011 levels by 2020. WRI analysis finds that Pennsylvania can reduce its CO2 emissions 21 percent below 2011 levels by 2020. These reductions would meet or exceed moderately ambitious EPA power plant emissions standards.

Pennsylvania is in a good position to comply with moderately ambitious standards for existing power plants if it builds off its progress to date. Weakening or repealing existing measures would make meeting emissions standards more difficult. Taking additional action could help the state achieve greater emissions reductions and adhere to ambitious standards, should EPA pursue them. For example, expanding the existing energy efficiency standard past 2016 to achieve annual energy reductions in the range of 1.5–2 percent is a cost-effective way to position the state to achieve stringent standards.