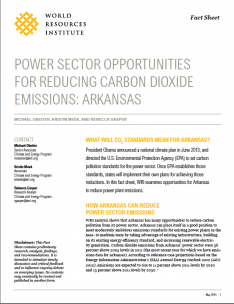 In this fact sheet, WRI examines how Arkansas can use its existing policies and infrastructure to reduce power plant emissions.

WRI analysis finds that Arkansas can reduce its CO2 emissions 39 percent below 2011 levels by 2020. These reductions could meet moderately ambitious standards for existing power plants in the near- to medium-term.