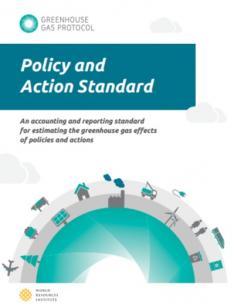 The GHG Protocol Policy and Action Standard provides a standardized approach for estimating and reporting the change in GHG emissions and removals resulting from policies and actions.

Order a hardcopy of this publication.

The standard was developed with the following objectives in mind:

Greenhouse gas (GHG) emissions are driving climate change and its impacts around the world. According to climate scientists, global greenhouse gas emissions must be cut by as much as 72 percent below 2010 levels by 2050 to have a likely chance of limiting the increase in global mean temperature to 2 degrees Celsius above preindustrial levels (IPCC 2014). Every degree increase in temperature will produce increasingly unpredictable and dangerous impacts for people and ecosystems. As a result, there is an urgent need to accelerate efforts to reduce GHG emissions.

This standard was developed by the Greenhouse Gas Protocol (GHG Protocol). The GHG Protocol is a multistakeholder partnership of businesses, NGOs, governments, academic institutions, and others convened by the World Resources Institute (WRI) and the World Business Council for Sustainable Development (WBCSD). Launched in 1998, the mission of the GHG Protocol is to develop internationally accepted GHG accounting and reporting standards and tools, and to promote their adoption in order to achieve a low emissions economy worldwide. All GHG Protocol standards and guidance are available at www.ghgprotocol.org.

In June 2012, WRI launched a two-year process to develop the Policy and Action Standard. A 30-member Advisory Committee provided strategic direction throughout the process. The first draft of the Policy and Action Standard was developed in 2012 by two Technical Working Groups consisting of over 50 members, then reviewed by members of a Review Group, including during three stakeholder workshops. In 2013, the second draft was pilot tested on 27 policies and actions in 20 countries and cities across a range of sectors to determine how the standard worked in practice. Pilot countries included Bangladesh, Belgium, Chile, China, Colombia, Costa Rica, Germany, India, Indonesia, Israel, Japan, Mexico, South Africa, South Korea, Tunisia, the United Kingdom, and the United States. The standard was revised based on pilot testing feedback and circulated for public comment in July 2014.