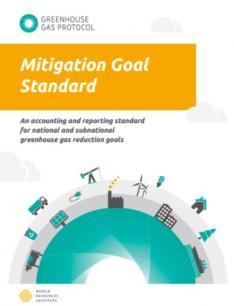 Order a hardcopy of this publication.

This standard is intended to help users accomplish the following:

—Design a mitigation goal, which entails

—Calculate allowable emissions in the target year(s) in order to understand future emissions levels associated with meeting the goal.

—Assess and report progress toward meeting a goal, which entails

—Assess and report whether a goal has been achieved.

How the Standard was Developed

This standard was developed by the Greenhouse Gas Protocol (GHG Protocol). The GHG Protocol is a partnership of businesses, nongovernmental organizations (NGOs), governments, academic institutions, and others convened by the World Resources Institute (WRI) and the World Business Council for Sustainable Development (WBCSD).

Launched in 1998, the GHG Protocol has the mission to develop internationally accepted GHG accounting and reporting standards and tools, and to promote their adoption in order to achieve a low emissions economy worldwide. All GHG Protocol standards and guidance are available at www.ghgprotocol.org.

The first draft of the Mitigation Goal Standard was developed in 2012 by a Technical Working Group, with strategic input from the project’s Advisory Committee. It was reviewed by the Review Group.

In 2013, the second draft was pilot tested for several goals to test how the standard works in practice. Pilots were conducted at the national or subnational level in Chile, India, Israel, South Africa, the United Kingdom, and the United States. The standard was revised based on pilot testing feedback and circulated for public comment in July and August 2014.

In parallel, the GHG Protocol Policy and Action Standard— an international voluntary standard for estimating the greenhouse gas effects of policies and actions—was developed through the same standard development process.