Priorities for a Financing Mechanism for Carbon Dioxide Capture and Storage 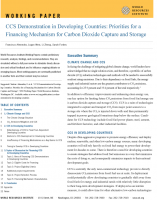 This working paper explores some of the key issues emerging around the effective financing of carbon dioxide capture and storage (CCS) demonstration projects in developing countries. It presents a series of options and recommendations to international policymakers and agencies working to support CCS development in a non-OECD context.

In facing the challenge of mitigating global climate change, world leaders have acknowledged that no single solution exists, and therefore, a portfolio of carbon dioxide (CO2) reduction technologies and methods will be needed to successfully confront rising emissions. Due to their dependency on fossil fuels, the energy supply and industrial sectors are the greatest contributors to CO2 emissions, accounting for 25.9 percent and 19.4 percent of the total respectively.

In addition to efficiency improvements and enhancing clean energy use, one key option for limiting future CO2 emissions from fossil fuel energy use is carbon dioxide capture and storage (CCS). CCS is a suite of technologies integrated to capture and transport CO2 from major point sources to a storage site where the CO2 is injected down wells and then permanently trapped in porous geological formations deep below the surface. Candidates for CCS technology include fossil fuel power plants; steel, cement, and fertilizer factories; and other industrial facilities.

Despite often-aggressive programs to promote energy efficiency and deploy nuclear, renewable, and other low-carbon energy sources, many developing countries will still rely heavily on fossil fuel energy to power their development for decades to come. There is therefore a need for developing countries to create strategies that address fossil fuel emissions in a way that minimizes the costs of doing so, and consequently minimizes impacts to their national development goals.

CCS is currently the only near-commercial technology proven to directly disassociate CO2 emissions from fossil fuel use at scale. Its deployment could potentially allow developing countries to gradually shift away from fossil fuels for energy and industrial needs with relatively little disruption to their long-term development strategies. If deployed as an interim measure, it could allow time for other alternative low-carbon technologies to be developed and deployed, permitting fossil fuels to be gradually phased out. This strategy could assist developing countries to transition to a low-carbon economy in the next 15–50 years.

While CCS is potentially attractive to some developing countries, there has been limited development of demonstration projects in Africa, Asia, or Latin America due mainly to their high cost in the absence of expected profits or significant carbon financing. The International Energy Agency (IEA) estimates the total cost for a new average-sized coal-fired power plant that captures up to 90 percent of its CO2 emissions to be US$1 billion over 10 years.

Existing financing for CCS is grossly insufficient to enable demonstration projects in developing countries. The few available funds are either spread over the full array of low-carbon technologies, or fall short of the magnitude or the mandate needed to propel commercial-scale CCS demonstrations forward. Current carbon offset mechanisms are not sufficient to spur CCS deployment in developing countries in today’s context either. Overall, existing CCS financing mechanisms help grow capacity, but their support is insufficient to leverage enough funding from capital markets to implement projects in a non-OECD context.

The IEA CCS Roadmap proposes 50 CCS projects in developing countries in the next 10 to 20 years. As well as reducing the developing world’s greenhouse gas emissions, accelerating CCS demonstration efforts in non-OECD countries can likely also improve technologies, increase efficiency, reduce uncertainty and risk, and initiate learning-by-doing at a lower cost than would be possible in OECD countries. The captured benefits from doing so will be more significant the sooner acceleration in CCS development in developing countries begins.

About this Paper: Topics of Discussion for Financing CCS in Developing Countries

This paper seeks to promote the effective deployment of CCS demonstration projects in developing countries. Aimed at international policymakers and agencies engaged in CCS funding and deployment negotiations and discussions, the paper explores some of the key issues emerging around this critically important topic, and it presents a series of options and recommendations to international policymakers. WRI’s aim is to assist the initial design of an effective approach for financing CCS demonstration projects in developing countries over the next 10 years. Below is a summary of the key topics and options explored in the paper.