In December 2015, world leaders gathered in Paris to map out a vision for a zero-carbon future. The result was the Paris Agreement, an historic breakthrough in the collective response to climate change. The Agreement set long-term goals to guide all nations: limit global warming to well below 2 degrees Celsius and make efforts to hold warming to 1.5 degrees C; strengthen resilience and enhance abilities to adapt to climate impacts and direct financial investment into low emissions and climate-resilient development.

To meet these long-term goals, negotiators set out a timetable in which each country is expected to submit updated national plans every five years for limiting emissions and adapting to the impacts of climate change. These plans are known as nationally determined contributions, or NDCs.

Countries gave themselves three years to agree on the implementation guidelines — colloquially called the Paris Rulebook — to execute the Agreement. At COP24, the UN climate conference in Katowice, Poland, in December 2018, countries adopted the majority of the Paris Rulebook — also sometimes known as the Katowice Climate Package — with a few unresolved issues.

These pages offer a brief guide to the Paris Rulebook — what it is, what it includes and why it is important — as well as an overview of the Rulebook’s various elements, the key decisions made in Poland and the process moving forward. 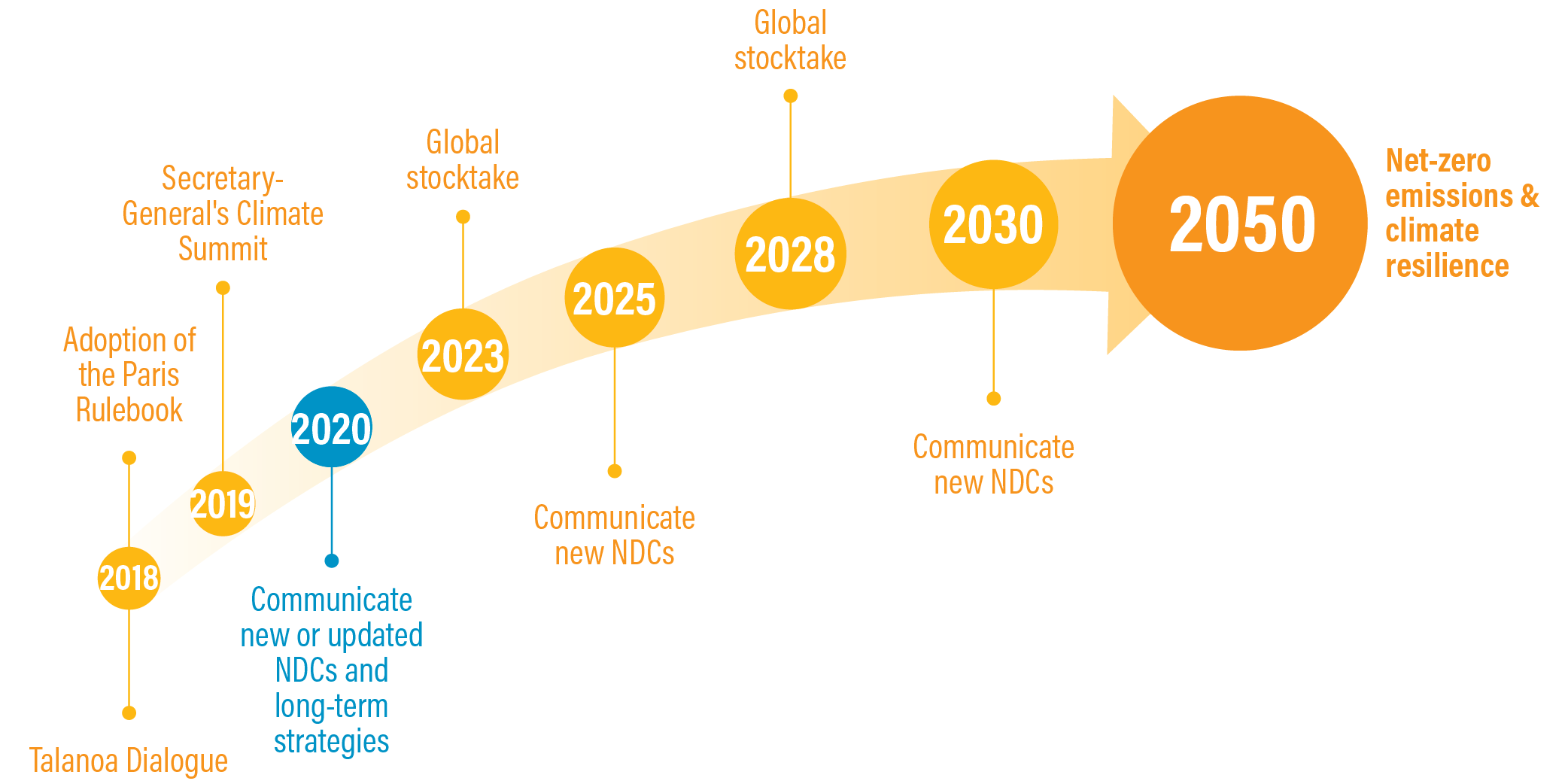 A snapshot of major milestones from the adoption of the Paris Rulebook until 2050. For more details, see the timeline page

To reach the Paris Agreement’s long-term goals, climate action must get more ambitious over time. To sustain this rising ambition, the Agreement establishes a continuous improvement cycle through which countries plan and communicate their NDCs, then implement their plans, and finally, review individual and collective progress to inform future planning and their next NDCs. This process provides the foundation for countries to fully bring the Paris Agreement to life.

This plan-implement-review cycle supports the Agreement’s commitment to comprehensively take stock of collective progress every five years in a process called the global stocktake, a key element of the process that is sometimes referred to as the Agreement’s ambition mechanism (learn more on the global stocktake page). The global stocktake will inform countries as they each consider how to strengthen their NDCs in light of their different national circumstances. Each round of NDCs is meant to reflect a country’s most ambitious plans and be stronger than the last. The Rulebook plays an essential role in providing detailed guidance for carrying out the plan-implement-review cycle of the Agreement.

Plan: The Rulebook addresses many questions about how countries should prepare their NDCs, such as what information should be included in a clear and transparent manner so that other countries and stakeholders can understand how each country plans to account for its greenhouse gas (GHG) emissions. The issue of whether all NDCs should cover the same timeframe has also been considered in the negotiations, though it has not yet been resolved. Countries relying on international support can more effectively plan climate action if they clearly understand the future financial support they will receive from developed countries. The Rulebook therefore addresses the types of information that developed countries and other countries providing support are to communicate, and a process for how this information will be considered and discussed. The Rulebook also offers guidance on what types of information participating countries should share concerning adaptation priorities, plans and actions.

Implement: Since NDCs represent national action for each country individually, countries will choose to implement their NDCs in a variety of ways, consistent with their domestic strategies. Countries are required to regularly and transparently report on their climate actions and support, including whether they have met or are on track to meet the goals in their NDCs. The Rulebook’s guidelines outline the specific details and information that countries will have to report. For countries deciding to voluntarily cooperate to reduce emissions, the negotiations have considered, but not yet agreed on, guidance to ensure that emissions reductions are not counted twice.

Review: To inform further planning, countries must review their efforts, individually and collectively. The Rulebook guides these reviews by outlining all review processes. The review of individual countries’ progress seeks to verify the quality of the data provided and assess progress against each country’s targets, while the global stocktake, as noted above, assesses collective progress toward the Agreement’s long-term goals and identifies the remaining gaps, challenges and opportunities for enhanced action. The Agreement also set up an expert committee focused on facilitating implementation and promoting compliance to help countries address barriers to implementation and further climate action. 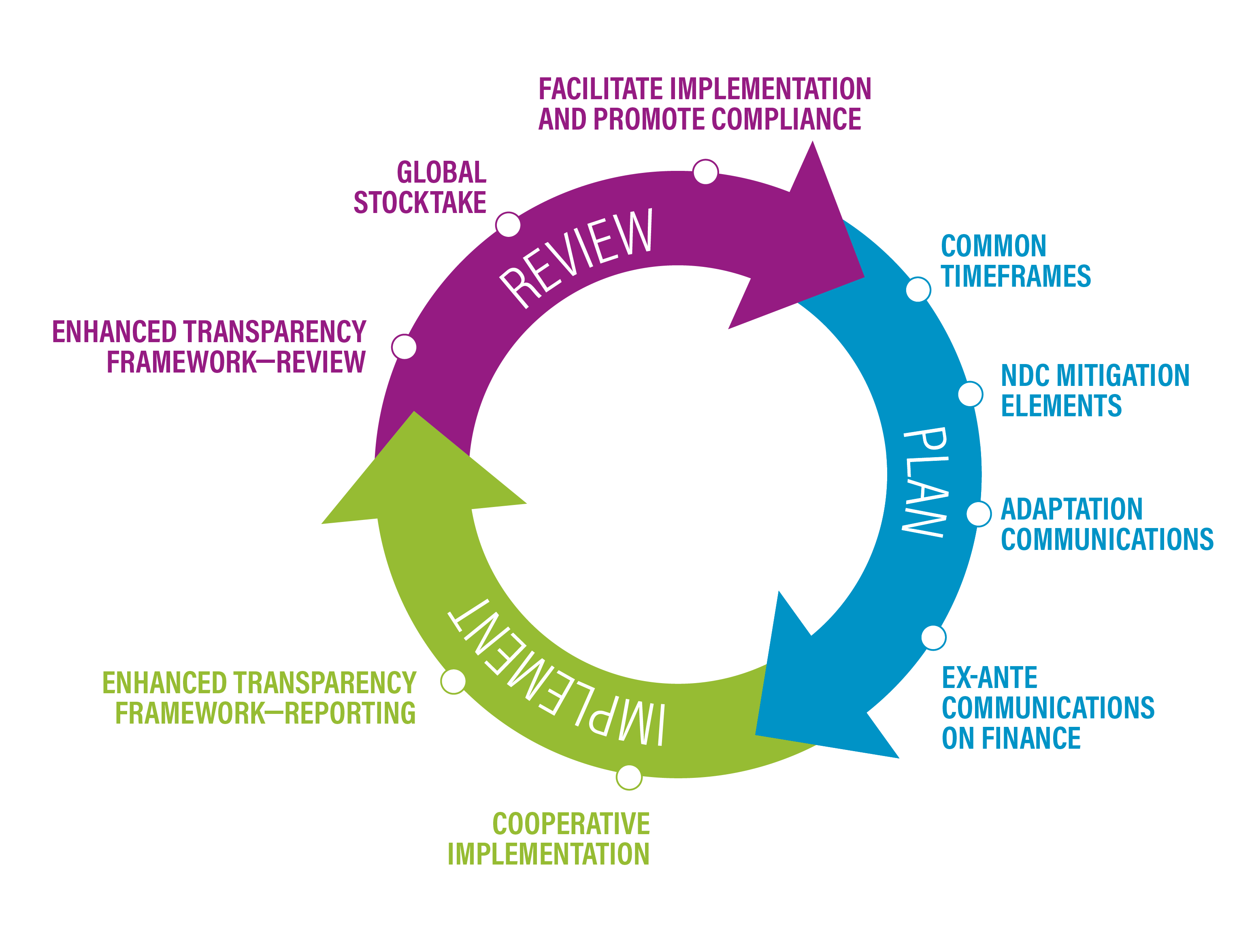