While dealing with sooty clouds from massive forest fires in the past several weeks, Indonesia has submitted its post-2020 climate action plan, known as an Intended Nationally Determined Contribution (INDC). In it, the world’s fifth largest emitter of greenhouse gases (GHG) committed to an unconditional target of a 29 percent emissions reduction by 2030 compared to a business-as-usual scenario, and up to a 41 percent reduction subject to international assistance. With this, Indonesia has cemented an extension to its voluntary 2020 mitigation goal and joined over 70 countries that have already announced their INDCs.

Last week, WRI published a blog on how Indonesia could improve its INDC based on a circulated draft by the Indonesian government, emphasizing the importance of a robust, transparent baseline against which reduction will be calculated. The final INDC took a big step forward by including a quantified baseline for projected emissions in 2030. At the same time, it removed important information such as the estimated amount of required support to reach Indonesia’s conditional target (previously stated as at least $6 billion), and it also lacks sufficient details on the modelling and assumptions of this baseline. The final INDC does not enhance the ambition of the GHG reduction target beyond 29 percent, nor does it reflect a number of recommendations to strengthen the formulation and accounting of the target.

Between now and the Paris climate talks, Indonesia can be more transparent by releasing the aforementioned information to give stakeholders even more confidence about the scale of the country's efforts. The conference in December will be a pivotal opportunity for the world’s fourth most-populous country and one of its fastest-growing economies to get support for a comprehensive national climate action plan following an ambitious scenario. 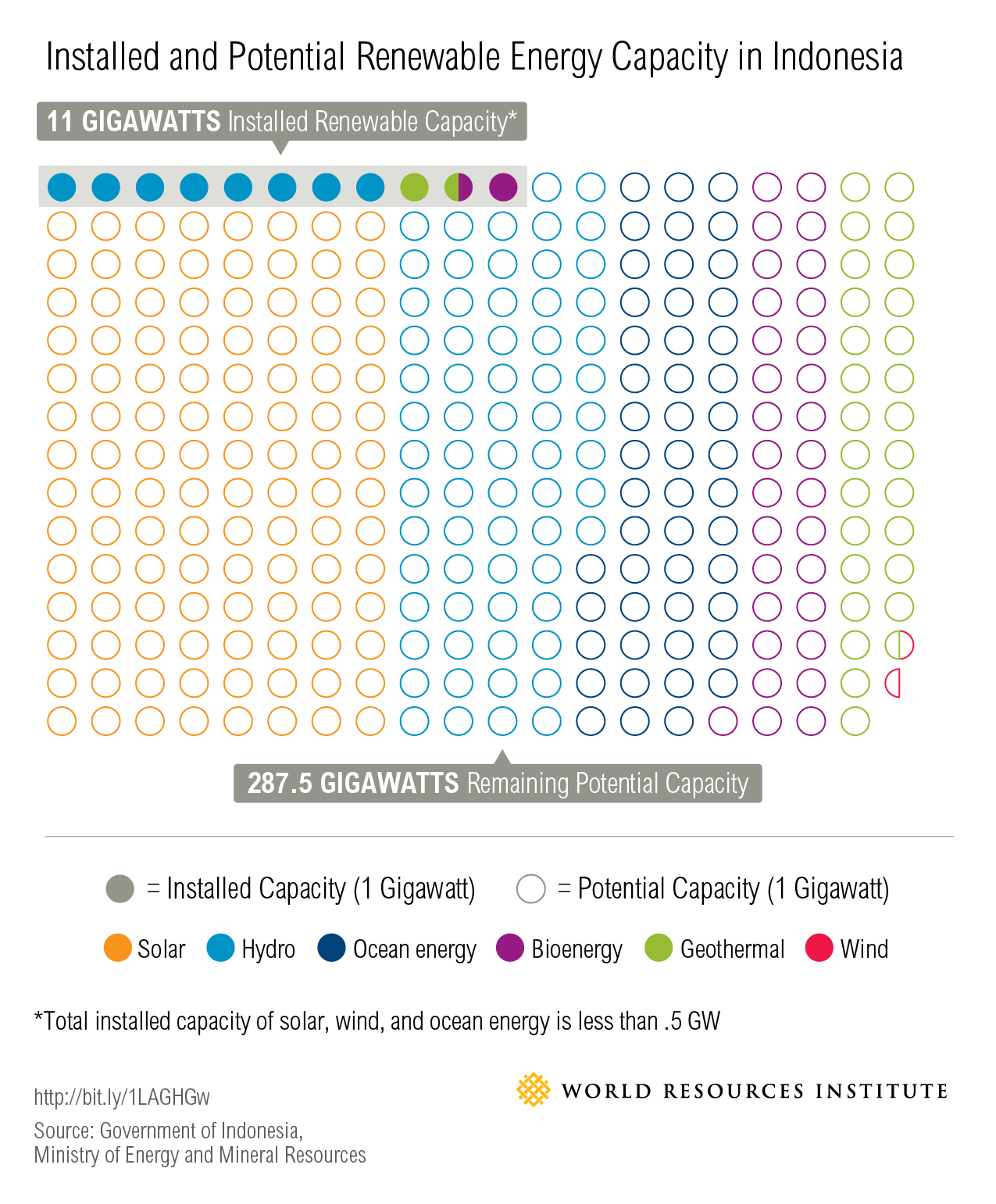 Indonesia could also boost its mitigation potential from the land use and energy sectors, which a government report says account for 56 percent and 34 percent, respectively, of total GHG emissions.

Indonesia’s climate plan includes a commitment to strengthen its efforts to mitigate land-based emissions by reducing deforestation and forest degradation, restoring ecosystem functions, as well as sustainable forest management, while highlighting the landscape approach in its implementation.

Unfortunately, Indonesia’s INDC did not provide clarity on its plan to deal with its recurring forest and peatland fires, one of the greatest sources of emissions in recent years. In just the last week in Indonesia, there were 13,773 fire alerts, of which 3,186 were high confidence, according to WRI’s forest monitoring platform Global Forest Watch Fires.

Quite contrary to the publicly accessed draft INDC which mentioned 12.7 million hectares of social forestry as a strategy to better manage the forest, the final INDC lacks a bold, quantified restoration pledge. It should be noted that recent statistics show that the country hosts 29 million hectares (72 million acres) of non-forested land under its forest estate legal zoning, providing huge potential for long-term restoration.

Indeed, the country’s existing moratorium policy — which calls for no new licenses for primary forest or peatland conversion — offers significant mitigation potential. Recent analysis by WRI and Duke University demonstrates GHG emissions from oil palm plantation expansion in Kalimantan (Indonesian Borneo) alone could be reduced by up to 35 percent if peatlands as well as primary and secondary forest are protected from plantation expansion. Broadening the moratorium to include secondary forests and existing concessions could help Indonesia to achieve substantial greenhouse gas reductions.

Clean and Equitable Energy for All

Since becoming a net-importer of petroleum in 2004, 60 percent of Indonesia’s energy supply has continued to rely on oil and gas, with renewable energy sharing only 6 percent of the national energy mix. With the country’s abundance of renewable energy options, the target to quadruple this share in a decade to 23 percent should be of a priority for the Indonesian government.

A recent call for large investments in coal-fired power as part of the new administration’s 35,000-MW electricity program, however, suggests that the renewable energy target will continue to compete with fossil-fuel based sources in the near term.

Other challenges to developing renewable energy in Indonesia, such as inadequate data infrastructure and legal framework, continue to raise investors’ doubts. Addressing this issue by building an integrated data and analysis platform that includes key geospatial information in resources potential, socio-economic data and financial opportunity would be a positive step to support decision makers achieve this target.

As with all policy-making processes, the presence of a clear chain of authority and a robust plan for measurement, reporting, and verification (MRV) is indispensable to ensure effective implementation and accountability. A recent change in the government’s structure has resulted in a certain degree of overlapping authority for climate change action, which could potentially hinder Indonesia from achieving its maximum mitigation potential. Moving forward, the establishment of less ambiguous decision-making and climate governance will greatly enhance Indonesia’s opportunity in achieving its reduction target. Successfully implementing this post-2020 climate plan will significantly contribute to the global goal of curbing warming to 2 degrees C (3.6 degrees F).