Fire alerts in Indonesia have spiked dramatically in recent days, surging even higher than the crisis-level outbreaks of June 2013, March 2014 and November 2014. Satellite feeds shown on Global Forest Watch Fires have recorded thousands of high-confidence fire alerts over the past two weeks, peaking at 1,189 on September 8th, exceeding the highest peaks of the last two years. 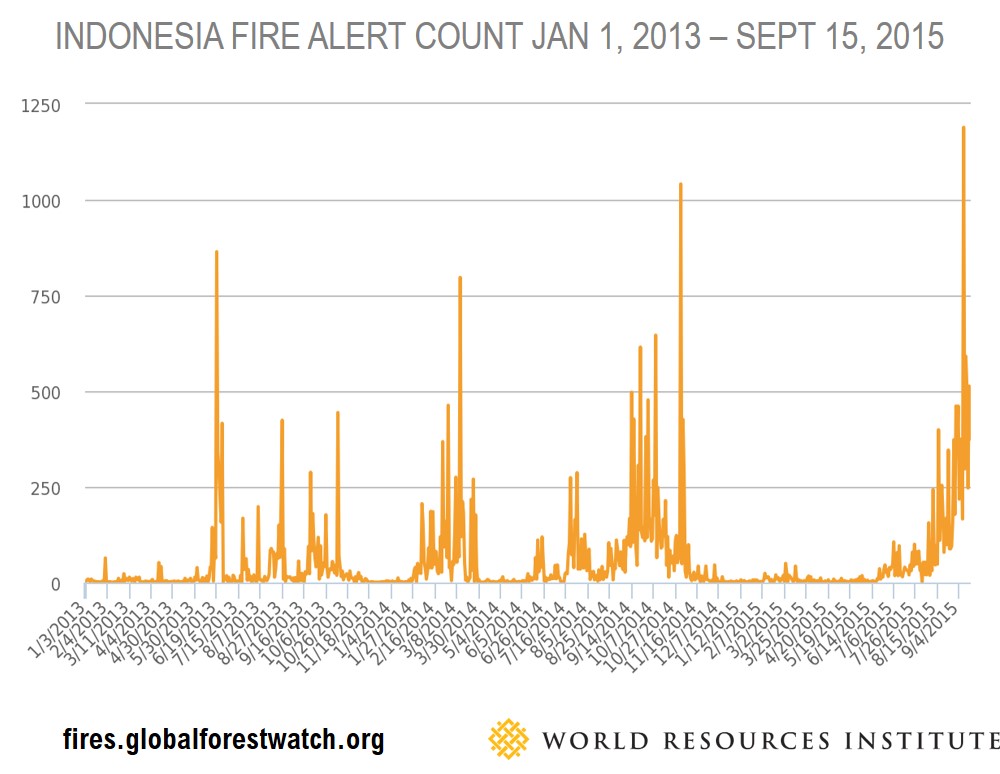 Despite the fact the it’s illegal to burn forest in Indonesia (except for very small local farmers), burning is often used to clear land for agriculture and commodity expansion, or as a “weapon” in conflicts over land. More than half of the fires are occurring on carbon-rich peat soils, causing severe smog and haze. Pollution from the fires in the provinces of Sumatra and Kalimantan is leading to diverted and canceled flights and widespread health impacts. In the last week, the air quality index crossed into “hazardous levels” in locations across Sumatra and Kalimantan. At hazardous levels of air quality, the entire population is likely to be adversely affected, and this is considered an emergency condition. Thousands of people have been reported leaving Pekanbaru in Riau Province to escape record air pollution levels. 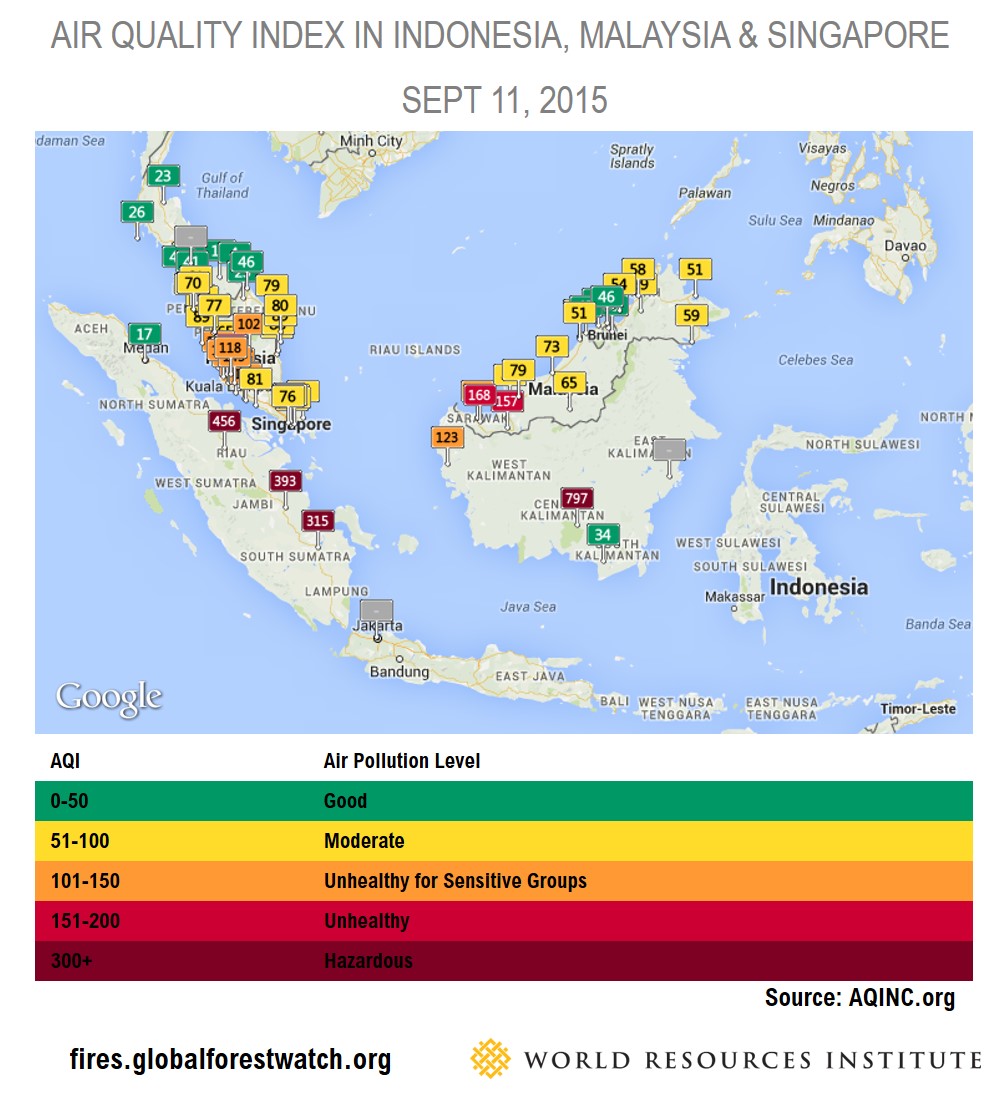 Where Are the Fires Burning?

Just how the Indonesian government should tackle the fires is a pressing issue. President Jokowi made a surprise visit to a concession area in South Sumatra this week, and promised to revoke the permits of companies found to be illegally using fire to clear land. The fires have been occurring across Sumatra and Kalimantan, with significant concentrations in Ogan Komerang Ilir, South Sumatra; Ketapang, West Kalimantan; and Pulang Pisau District in Central Kalimantan. A State of Emergency has been declared for Riau Province, but far more fires and equally poor air quality have been observed in South Sumatra, Jambi, and West and Central Kalimantan. This impact is more widespread than seen in previous fire episodes, and is broadening public concern and demand for more effective fire prevention and response from government agencies, companies and others. 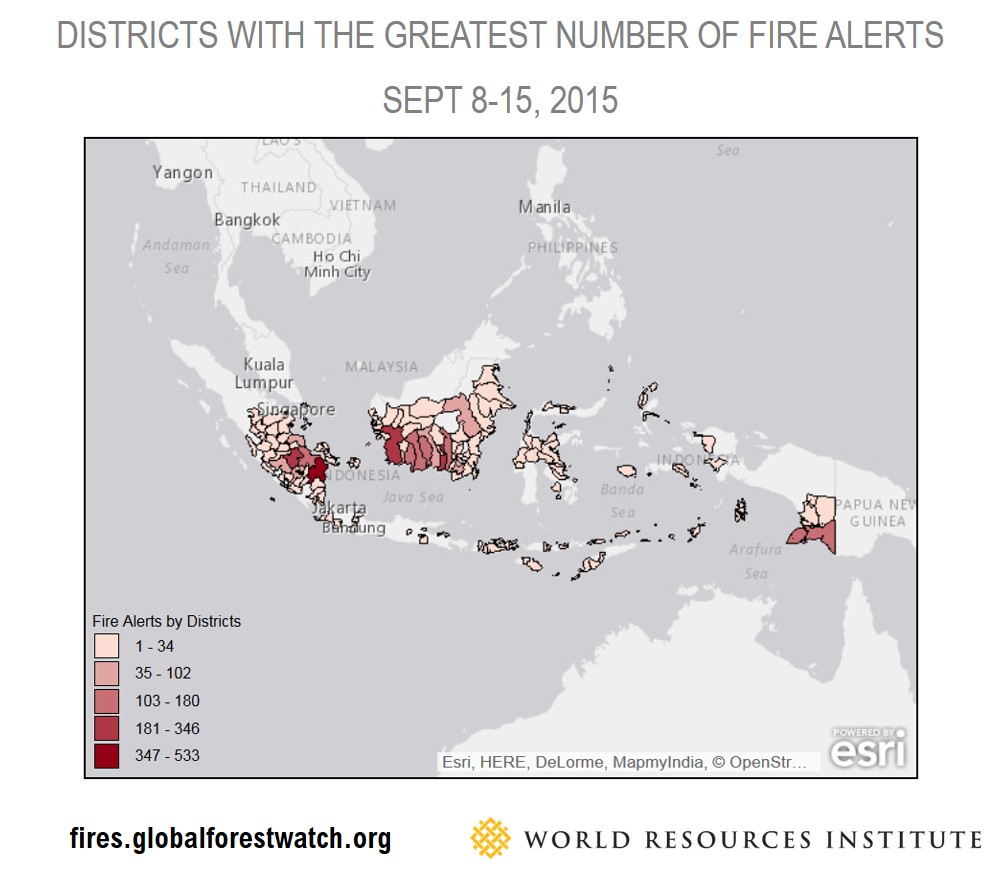 Fires in national parks and other protected areas also highlight issues with law enforcement. Widespread fires occurred in Tesso Nilo National Park during July and August, and are now smoldering in Tanjung Puting National Park and several other protected areas. These parks are globally significant for their biological diversity, and provide some of the last remaining habitats for species such as orangutans, Sumatran elephants and clouded leopards. 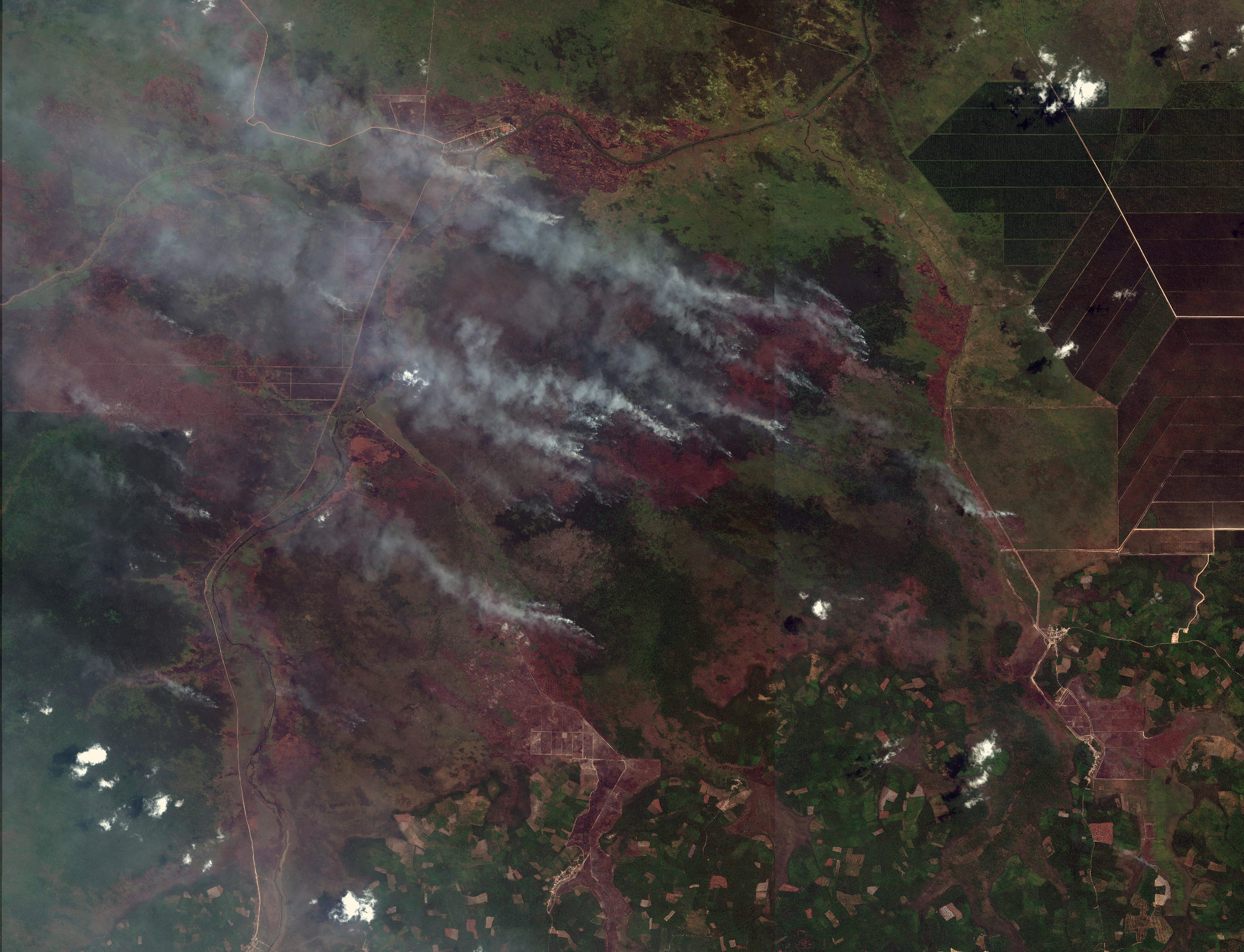 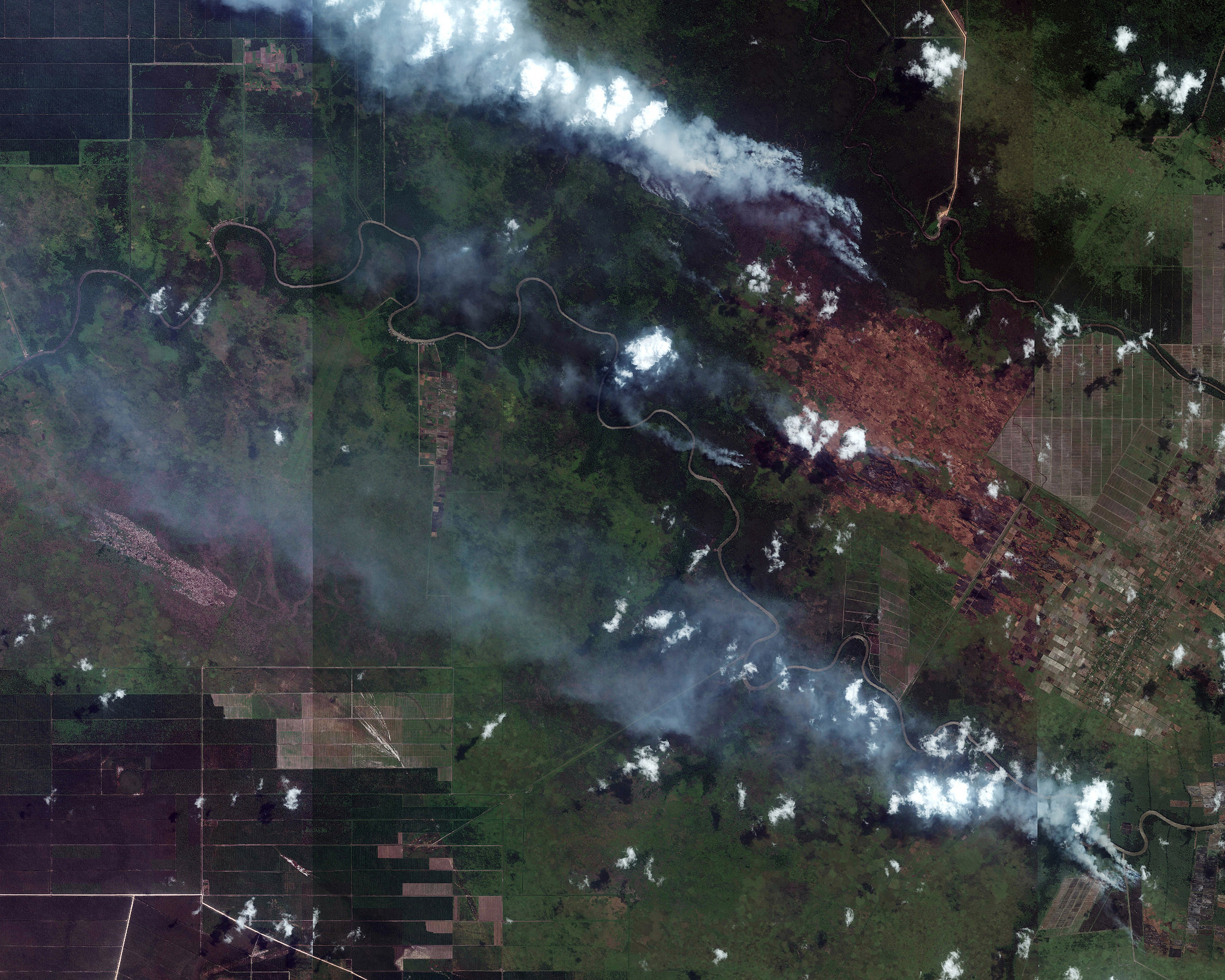 Active fires burning amid plantation development in South Sumatra on September 10th were captured in this image by Digital Globe’s WorldView-2 satellite. (Lat -3.275, Lon 105.75; view active fires in this location on GFW Fires)

What’s to Be Done About the Fires?

Indonesia often experiences outbreaks of forest and land fires—especially during the dry season—and satellite evidence shows the fires issue remains far from resolved. Addressing the crisis will require urgent enforcement action to hold those who set fires or manage land accountable and deter others from future burning. But controlling large fires once they are burning across large areas is extremely difficult.

The government needs to prioritize, like never before, efforts to prevent fires in the first place, otherwise the region will suffer repeatedly for years to come. This requires sustained engagement with local farmers and local government to address conflicts over land; far more effective law enforcement, including against those who may be politically well-connected or locally powerful; and systematic clarification and mapping of land and resource ownership and responsibilities.

The recent ruling by Indonesia’s Supreme Court, which upheld fines of up to $25.6 million for illegally burning the Tripa peatland in Aceh back in 2012 is a good precedent for future law enforcement. Better spatial information and land tenure information, including smallholder plantations, will allow the government to develop a more robust monitoring and enforcement system. This process is being accelerated through the critical implementation of the One Map approach.

Satellite monitoring and real-time information can assist by identifying areas to prioritize, but only if government agencies and law enforcement act upon the information. Global Forest Watch Fires provides a platform for viewing daily fire alerts, real-time wind and air quality data, concession areas, and more. You can even sign up to be alerted by text message or email when new fires are detected. Further on-the-ground investigation is then needed to learn the full story.

This video shows real-time data on how wind patterns (blue and green streams) are carrying smoke and haze from fires in Indonesia throughout the region (NASA fire alerts are represented by orange points). View this data live on GFW Fires.

Government officials, companies who source commodities from Indonesia or are responsible for managing the land, community leaders, research organizations and international donors should redouble efforts to work together to prioritize solutions, follow through on implementation, and monitor their progress carefully. If not, the fires and their devastating impacts—such as choking air pollution, lost habitat, and a repetitive blame game—will continue year after year.