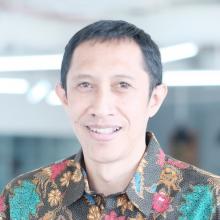 Dr. Nirarta “Koni” Samadhi is the country director of WRI Indonesia. Formerly known as Deputy Minister of Indonesia’s Unit for Development Monitoring and Oversight (UKP4), he and WRI have worked together over many years, and he joins WRI Indonesia at a time when its work in the forest, land use, and governance sectors is expanding.

While at UKP4, Dr. Koni played a leading role in designing policies such as Indonesia’s groundbreaking forest moratorium, establishing Indonesia’s new REDD+ agency (BP REDD+), and driving the OneMap Initiative to harmonize Indonesia’s land use planning. Dr. Koni previously served as chair of the Working Group on Moratorium Monitoring, was part of the Indonesia REDD+ Task Force, and worked with the UNDP as a strategic planning advisor and head of Papua Accelerated Development (PADU) Advance Team.

During his tenure at UKP4, Dr. Koni observed that WRI was consistent in contributing significant work to improve environmental management, and he would like to expand and tailor the organization’s contribution for the people of Indonesia. Through WRI Indonesia, he plans to work with all stakeholders and promote innovations to help ensure that the new administration, as well as sub-national governments, will deliver sustainable development programs.