Translating Targets into Numbers: Quantifying the Greenhouse Gas Targets of the G20 Countries 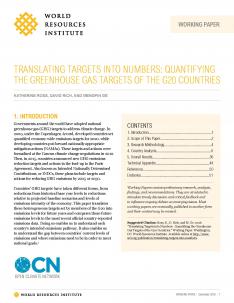 Countries around the world have set greenhouse gas targets, but they have taken different forms, from reductions in historical emissions to reductions relative to projected business-as-usual scenarios or the emissions intensity of the economy. In many cases, countries have not explicitly stated what their targets imply for future emissions in absolute terms, so it can be difficult to understand where emissions are headed. This working paper analyzes the varied greenhouse gas reduction targets of the G20 countries—including China, the United States, India, the European Union, and Brazil, to name a few—and translates them into common metric of absolute emissions levels in 2020, 2025, and 2030. It also presents the targets visually to increase the clarity of countries’ proposed emissions limits.