This technical note describes the methods used to create a dataset that tracks electric school bus (ESB) adoption across the United States. The dataset tracks the number of “committed” ESBs at the school district level, as well as details about individual buses, including bus manufacturer and funding source(s). It also contains school district socio-economic characteristics like poverty rates and racial composition, to enable wider analysis including whether the transition to ESBs is happening equitably. 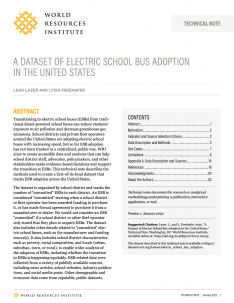 This Technical Note is part of the Electric School Bus Initiative within our WRI Ross Center for Sustainable Cities. Reach out to Leah Lazer for more information.

This Technical Note is part of the Electric School Bus Initiative within our WRI Ross Center for Sustainable Cities. Reach out to Leah Lazer for more information.

This technical note is regularly updated. Please refer to the change log, available as a download option, to see what was updated.

Transitioning to electric school buses (ESBs) from traditional diesel-powered school buses can reduce students’ exposure to air pollution and decrease greenhouse gas emissions. School districts and private fleet operators around the United States are adopting electric school buses with increasing speed, but so far ESB adoption has not been tracked or reported in a centralized and publicly accessible way. WRI aims to create and disseminate sound, up-to-date, accessible data and analyses that can help school district staff, advocates, policymakers, and other stakeholders make evidence-based decisions and support the transition to electric school buses. This first-of-its-kind dataset that tracks ESB adoption across the United States.

The dataset is organized by both school district and individual ESB and tracks the number of “committed” ESBs. An ESB is considered “committed” starting from the point when a school district or fleet operator has been awarded funding to purchase it, or has made formal agreement to purchase it from a manufacturer or dealer. We would not consider an ESB “committed” if a school district or other fleet operator only expressed interest in ESBs or stated that they plan to acquire ESBs, without awarded funding or an agreement with a third party. The dataset also tracks the progress of each individual ESB through the four phases of the adoption process: “awarded,” “ordered,” “delivered,” and “operating.” It also contains school district characteristics including poverty, racial composition, air pollution, and locale (urban, suburban, town, or rural), to enable wider analysis of the adoption of ESBs, including the extent to which the transition to ESBs is happening equitably.

ESB-related data were collected from a variety of publicly available sources, including news articles, school websites, industry publications like School Bus Fleet magazine, and social media posts. Other demographic and economic data come from reputable, public datasets including the Environmental Protection Agency (EPA), U.S. Census, and National Center for Education Statistics. This dataset will be updated quarterly over the life of WRI’s Electric School Bus Initiative to include new ESB commitments and additional indicators.

The Electric School Bus Series: Wiring Up in Knox County

The State of Electric School Bus Adoption in the US

Electrifying the US School Bus Fleet: How to Put Children First in the Zero-emission Transition