Synthesizing results from WRI China’s EV-Grid Simulator, this report analyzes the grid impacts of different types of EV charging within two Chinese cities and recommends the use of VGI measures to defer costly grid capacity expansions. 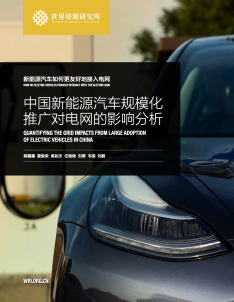 This Report is part of Electric Mobility within our WRI Ross Center for Sustainable Cities. Reach out to Tini Tran for more information.

This Report is part of Electric Mobility within our WRI Ross Center for Sustainable Cities. Reach out to Tini Tran for more information.

As the global frontrunner in plug-in electric vehicle (PEV) adoption, China can expect increasing impacts on its electrical grid as the uptake in PEVs and fast charging infrastructure continues to accelerate.

Employing WRI China's EV-Grid Simulator, this report analyzes the impact of increased EV uptake and different charging strategies on the electrical grid in Beijing and Suzhou both on the transmission level and the distribution level. The analysis’ Business-as-usual (BAU) and High-impact scenarios estimate increases in peak load depending on PEV uptake and charging behaviors (such as charging powers and frequencies).

Through Monte Carlo Simulation and Linear Programming, the analysis determines whether negative impacts to the grid can be minimized through Vehicle-Grid Integration (VGI) measures, such as managed charging and vehicle-to-grid (V2G). Results demonstrate that VGI measures could successfully mitigate peak load increases and potential defer costly grid capacity expansions.