Looking Past the Horizon: the Case for Indonesia’s Long-Term Strategy for Climate Action 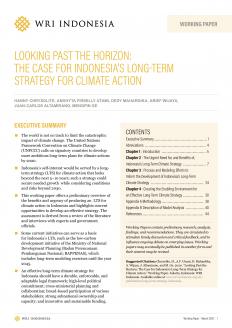 This Working Paper is part of our Climate Program.

This Working Paper is part of our Climate Program.

Indonesia is growing rapidly in terms of the economy and demography. At the same time, Indonesia is emitting greenhouse gas emission and is among the top global emitter. Indonesia has committed to reducing its greenhouse gas emissions by 29 percent to up to 41 percent against a business-as-usual level in 2030. However, currently Indonesia does not have a long-term decarbonization plan in place. Without a long-term plan, Indonesia’s growth will also face some risks that are often foreseen with a short-term planning approach. Indonesia’s self-interest would be served by a long-term strategy (LTS) for climate action that looks beyond the next 5–10 years; such a strategy could secure needed growth while considering conditions and risks beyond 2030. The working paper offers a preliminary overview of the benefits and urgency of producing an LTS for climate action in Indonesia and highlights current opportunities to develop an effective strategy. In particular, the paper strives to answer the following questions: