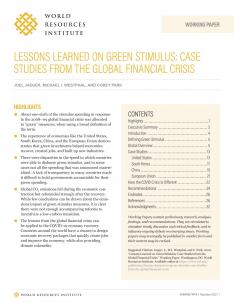 This Working Paper is part of our Finance Center, Climate Program, and Economics Center. Reach out to Joel Jaeger for more information.

This Working Paper is part of our Finance Center, Climate Program, and Economics Center. Reach out to Joel Jaeger for more information.

Today’s policymakers designing economic stimulus packages to respond to the COVID-19 pandemic can draw lessons from the most recent point of comparison, the global financial crisis. This paper gives a global overview of the green stimulus announced in 2008 and 2009 and then provides case studies of four of the economies that spent the most on green measures: the United States, South Korea, China, and the European Union. For each case study the paper evaluates how much was spent on green vs. polluting measures, how successfully the stimulus was implemented, the impact on the economy and particularly on jobs, and the impact on greenhouse gas emissions and other environment outcomes. The paper then briefly examines the differences between the global financial crisis and the COVID-19 crisis and presents recommendations for policymakers.

Countries around the world have a chance to build back better than before by designing COVID-19 stimulus packages that quickly create jobs and build up new industries while also providing climate co-benefits.