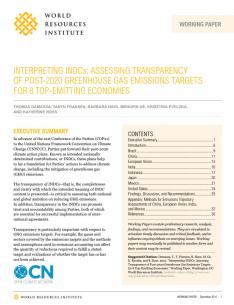 This paper evaluates the transparency of the greenhouse gas emissions targets presented in the INDCs of eight major emitters —Brazil, China, the European Union, India, Indonesia, Japan, Mexico, and the United States—which, together, contribute nearly two-thirds of annual global emissions. It finds that all 8 have made efforts to follow basic UNFCCC reporting guidelines, but that, in many cases, more information will be needed to fully understand the level of ambition in their greenhouse gas emissions reduction targets. It also presents emissions trajectories for each country through 2030 which reflect estimated pathways to achieve the INDC target(s) and which highlight—and quantify, where possible—uncertainties in the intention of the INDC targets that are due to transparency gaps. It also suggests ways these countries can improve the transparency of their greenhouse gas emissions targets.

In advance of the 21st Conference of the Parties (COP21) to the United Nations Framework Convention on Climate Change (UNFCCC), Parties put forward their post-2020 climate action plans. Known as intended nationally determined contributions, or INDCs, these plans help to lay a foundation for Parties’ actions to address climate change, including the mitigation of greenhouse gas (GHG) emissions.

The transparency of INDCs—that is, the completeness and clarity with which the intended meaning of INDC content is presented—is critical to assessing both national and global ambition on reducing GHG emissions. In addition, transparency in the INDCs can promote trust and accountability among Parties, both of which are essential for successful implementation of international agreements.

Transparency is particularly important with respect to GHG emissions targets. For example, the gases and sectors covered by the emissions targets and the methods and assumptions used in emissions accounting can affect the quantity of reductions required to fulfill a stated target and evaluations of whether the target has or has not been achieved.

This paper evaluates the transparency of the GHG emissions targets presented in the INDCs of eight top-emitting Parties—Brazil, China, the European Union, India, Indonesia, Japan, Mexico, and the United States—which, together, contribute nearly two thirds of annual global GHG emissions. Using the Open Book framework developed by World Resources Institute, we present information in each Party’s INDC related to its emissions target(s) and identify any transparency gaps—that is, information that is unclear or not made explicit.

In addition, this working paper presents GHG emissions trajectories for each of the eight Parties assessed through 2030, which reflect estimated pathways to achieve the INDC GHG emissions target(s). The purpose of these trajectories is not to predict future emissions, but to highlight—and quantify, where possible—uncertainties in the intention of the targets that are the result of transparency gaps.

We present the following key messages from our analysis of eight Parties’ INDCs:

Parties analyzed have adhered to most of the general guidelines in the Lima Call for Climate Action. They have addressed categories mentioned in the text negotiated at COP20, such as a target reference point, time frames and/or periods for implementation, as well as scope and coverage, when describing their GHG emissions target.

Transparency gaps remain for all Parties, which affect understanding of their proposed GHG emissions targets. We lay out these gaps based on WRI’s Open Book framework, and quantify them where possible. For some Parties, and cumulatively, the uncertainty in emissions resulting from gaps in transparency is significant.

The degree of transparency provided by INDCs is associated with target type. Parties that put forward absolute/base-year GHG emissions targets tend to have presented them more transparently than Parties proposing other types of targets, according to the Open Book framework. The framework’s transparency requirements for absolute/base-year emissions targets are more straightforward and appear to be easier for Parties to meet. This is true of all Parties assessed here, regardless of their economic development status.

Details on land-sector accounting and use of market mechanisms, in particular, are generally lacking. While six of the eight Parties specified whether the land sector was covered by their GHG emissions target, most Parties did not provide details on the accounting approach to be applied to the sector. Likewise, although the majority of Parties specified whether or not they intend to use international market mechanisms to achieve their target, they did not specify at what level. Nor did they specify how they would ensure that traded units are not double-counted toward more than one Party’s target.

Parties assessed here are encouraged to enhance the transparency of their GHG emissions targets based on the opportunities we have identified in this working paper. Revisions could be provided through the INDC portal of the UNFCCC while it remains open, in “final” submissions to the UNFCCC following COP21 (if such an opportunity is provided by an agreement), or in separate documents published by governments at any point in time. To improve transparency, we also offer the following general recommendations to governments, negotiators, and other practitioners:

Consider providing indicative information on the trajectory that national emissions are expected to follow in advance of the target year. Although having an end point (or GHG emissions level) in mind is good practice for goal-setting, it is ultimately the trajectory of a country’s GHG emissions and the cumulative emissions released to the atmosphere that will have the greatest impact on our planet’s climate. Ideally, Parties would document an expected trajectory for their total GHG emissions through 2030 (in addition to providing a target goal for a specific year), so that the anticipated cumulative emissions released to the atmosphere can be estimated.

Consider reframing GHG targets as target types with more straightforward transparency guidance. Any GHG emissions target can be translated into any target type without affecting ambition (Levin et al. 2015); Parties that struggle to meet transparency guidance associated with more complex types of targets could consider reframing their targets as other target types. Targets to reduce emissions from a baseline scenario, in particular, have extensive and complex transparency requirements, according to the Open Book framework. Absolute and fixed-level targets are most straightforward.

In addition, UNFCCC negotiators should:

Encourage Parties to enhance the transparency of their GHG targets, in particular, if and when there is an opportunity for the INDCs to be communicated or finalized after COP21 in Paris. Parties may agree that countries should “finalize,” communicate, or otherwise formalize their INDCs (which would then become NDCs) following COP21. Negotiators could adopt language encouraging Parties to use that opportunity to further enhance the transparency of their contributions.

Maintain and build on the information guidance provided in the Lima Call for Climate Action. While the guidance in the Lima decision is entirely voluntary, it is clear that Parties consulted it and, to an extent, formulated their INDCs around it. This demonstrates the value of providing such guidance in the context of a COP decision. Negotiators can build on this experience by continuing to adopt such guidance and refining it in ways that encourage Parties to continue to close transparency gaps in line with their capacities.

Work toward clear and robust accounting rules for the land sector and market mechanisms. A number of Parties have retained flexibility on the role of these factors in their INDCs pending their treatment in an eventual international agreement, signaling the importance of developing clear and consistent rules. While details will be developed subsequent to COP21, an agreement in Paris can help by outlining strong principles to guide this development.

The analysis presented in this working paper aims to inform governments responsible for developing and reporting INDCs, analysts and civil society groups seeking to understand and evaluate the INDCs, and other stakeholders who will be directly affected by Parties’ post-2020 plans. This work is relevant in the lead-up to COP21 in December 2015, and also provides a foundation for discussion and analysis in 2016 and beyond.