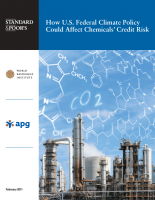 If passed, the American Power Act (APA) would require companies to hold permits to emit GHGs for all emissions from facilities emitting more than 25,000 tons of carbon dioxide (CO2) or equivalent greenhouse gas. Most large U.S. chemical facilities would meet this threshold.(iv) By limiting the supply of these permits—known as emissions allowances—in the market, the government would be able to cap economy-wide emissions. The APA also includes provisions that would rebate free emissions allowances to facilities in select subsectors. Eligibility for these free allowance rebates is at the subsector level, and depends on a subsector’s energy intensity and trade exposure.(v) WRI has calculated that the APA provides enough free allowances to energy intensive, trade exposed manufacturing industries that any eligible subsector—as a whole—will receive enough free permits to cover all emissions in that subsector for 2016 and several years beyond (see WRI’s accompanying technical document). However, the risk remains that the supply of free permits relative to demand may decline over time and at a faster rate than originally envisaged.

Predicting how the APA would affect the economy is challenging. For their analysis, Standard & Poor’s and WRI have each relied on the U.S. Government’s Energy Information Administration’s (EIA) projections of APA’s impact on GDP, energy prices, and GHG emissions permit prices.(vi) As with any forecasting, these projections indicate what could happen, rather than what would happen.

Standard & Poor’s and WRI based their respective analyses on EIA projections using three GHG permit price scenarios—low, medium, and high—under the APA. Based on these projections, most of the chemicals subsectors we examined would only see modest energy and compliance effects in the first year of assumed compliance (2016).

These projections are premised on the assumption that users across the economy will likely switch away from emissions-intensive fuel/feedstock sources (i.e., petroleum and coal) and demand lower emissions fuel/feedstock sources (including natural gas) because of the price signal cap-and-trade policy creates. APA provisions require utilities to pass any free allowances they receive to industrial consumers, including chemicals manufacturers, in the form of lower electricity prices, which mutes electricity price changes.

WRI estimates that facilities in 10 of the 13 chemicals subsectors (as a whole) would be eligible to receive free allowance rebates under the APA. For these eligible subsectors, WRI expects no net compliance obligations—at the subsector level—in 2016 and through as far as 2033 (see WRI’s accompanying technical document). WRI expects only facilities in three of the 13 subsectors examined— the industrial gas, ethyl alcohol, and phosphatic fertilizer— would not be eligible to receive free allowances since these subsectors don’t meet the legislation’s threshold for trade exposure and or energy-intensity.

WRI compared the 13 GHG-intensive subsectors’ relative policy-related energy and compliance costs (based on EIA projections in 2016) against Standard & Poor’s ranking of relative competitive risks for each subsector (see Figure 1). WRI assumed that the ratio of these subsectors’ emissions and their energy-related fuel/feedstock purchases to their size, as measured by value of shipments, is the same in 2016 as in 2006 (the most recent data available for emissions estimates). This comparison appears to indicate the following:

WRI and Standard & Poor’s expect that the credit impact at a company-level would likely vary within each subsector based on the following:

The subsectors that are most likely to face EPA regulation

WRI believes that 2016 is likely the earliest year that future EPA regulation would cover GHGs from existing chemical facilities. The form of regulation is unclear. Previously, the EPA has used both market-based and command-and-control regulation to limit pollutants.

WRI believes that absolute emissions and emissions reduction potential are among the factors that the EPA will consider when regulating GHG emissions; other key criteria include cost feasibility and the remaining useful life of facilities (see Figure 2). Nitric acid and adipic acid production—part of the nitrogenous fertilizer and all other basic organic subsectors, and an input into fiber manufacturing—are also likely to come under regulation as a significant source of nitrous oxide (N2O) emissions (a potent GHG). (Because of data limitations, Figure 2 does not reflect cost feasibility, the remaining useful life of facilities, and nitric acid and adipic acid production.)

Assuming the EPA does not use market-based mechanisms, WRI and Standard & Poor’s believe the key credit-related differences between the cap-and-trade and EPA regulatory scenarios include:

Summary of Relative Subsector-Level Vulnerability under the American Power Act