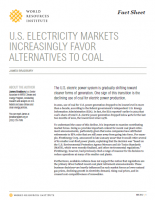 The U.S. electric power system is gradually shifting toward cleaner forms of generation. One sign of this transition is the declining use of coal for electric power production.

In 2011, use of coal for U.S. power generation dropped to its lowest level in more than a decade, according to the federal government’s independent U.S. Energy Information Administration (EIA). In fact, the EIA reported1 earlier in 2012 that coal’s share of total U.S. electric power generation dropped below 40% for the last two months of 2011, the lowest level since 1978.

To understand the cause of this decline, it is important to examine contributing market forces. Doing so provides important context for recent coal plant retirement announcements, particularly given that some companies have attributed retirements to EPA rules that are still years away from going into force. For example, FirstEnergy Corp. announced in late January 20122 that it would retire several of its smaller coal-fired power plants, explaining that the decision was “based on the U.S. Environmental Protection Agency Mercury and Air Toxics Standards (MATS), which were recently finalized, and other environmental regulations.” FirstEnergy, however, had previously cited a range of reasons3 for its decision to reduce operations at many of its smaller coal plants.

Furthermore, available evidence does not support the notion that regulations are the primary driver behind recent coal plant retirement announcements. These business decisions4 are heavily influenced by such market forces as lower natural gas prices, declining growth in electricity demand, rising coal prices, and increased cost-competitiveness of renewables.