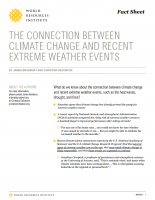 The United States has been experiencing ongoing extreme heat, droughts, and wildfires. This fact sheet examines the connection between climate change and these recent extreme weather events.

What do we know about the connection between climate change and recent extreme weather events, such as the heat waves, drought, and fires?